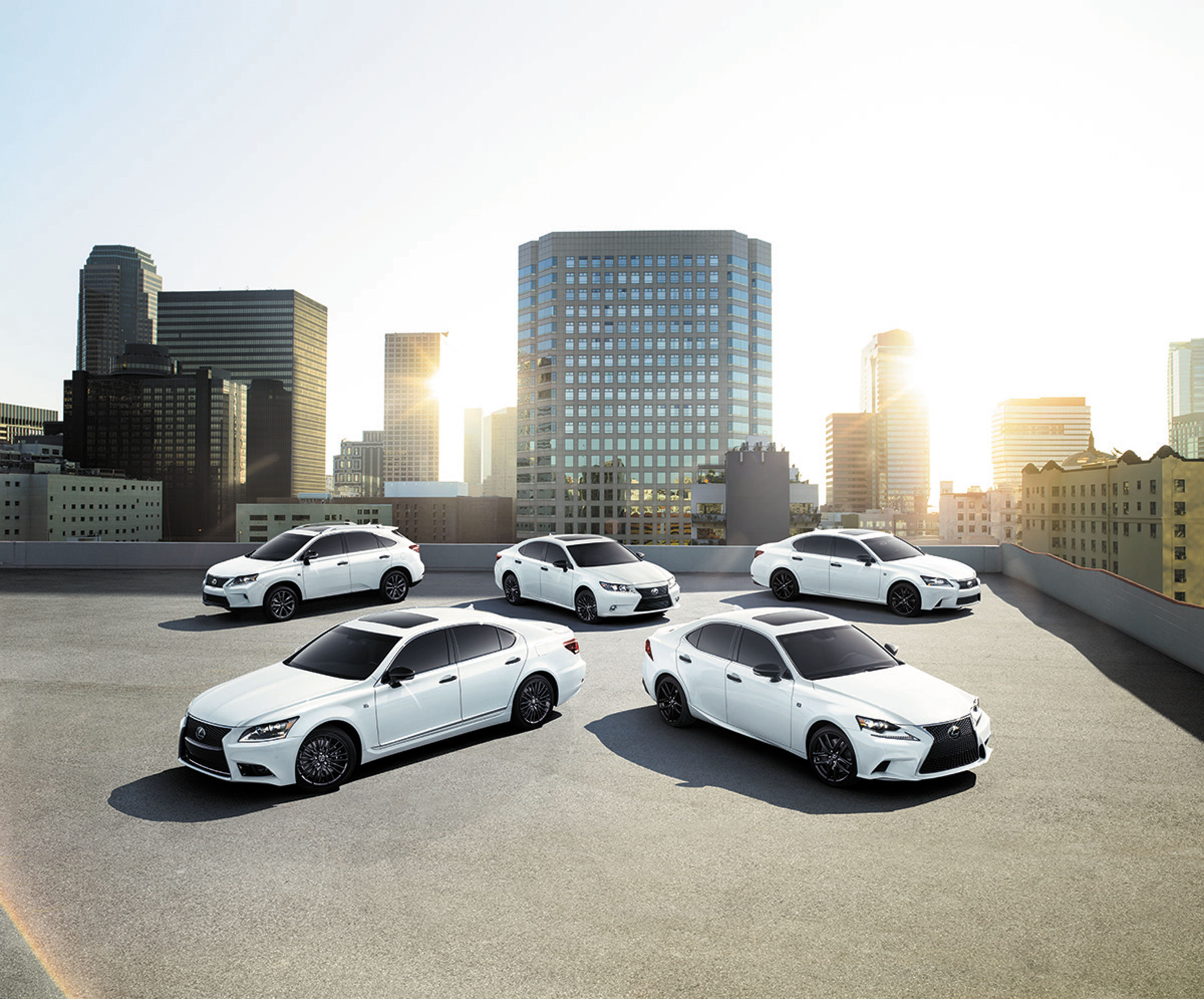 To celebrate 25 years of luxury, Lexus showed off their new Crafted Line as a special edition arriving at Park Place and other dealerships this November. The Crafted Line offers customers exquisite style that is unprecedented in the 2015 model line. The beautiful cars feature an Ultra White and Obsidian exterior wrapped around a stunning two-tone black and red interior. As an exciting component of this exclusive line, Lexus is complementing each of The Crafted Line vehicles with a two-piece TUMI duffle bag set designed exclusively for these sporty and elegant cars.

For The Crafted Line, Lexus partnered with TUMI luggage, known for producing unparalleled premium travel, business, and lifestyle luggage accessories for over 35 years.  Each Crafted Line vehicle comes with an exclusive luggage set to match the elegance of these beautiful cars. The TUMI luggage pieces offered with the cars feature the Lexus logo along with an interior to match the vehicle’s, including red stitching. Along with the two bags that come with the cars, TUMI also has designed larger bags to accompany The Crafted Line owners’ on a longer travel.*Delivery, handling and processing is an additional $925.

All Crafted Line models, along with the TUMI duffle bag set, will be on public display for the first time at the Pebble Beach Concours d’Elegance August 15-17.  For more information, check back with Park Place Dealerships, as pricing details are expected to be released closer to the launch of The Crafted Line. 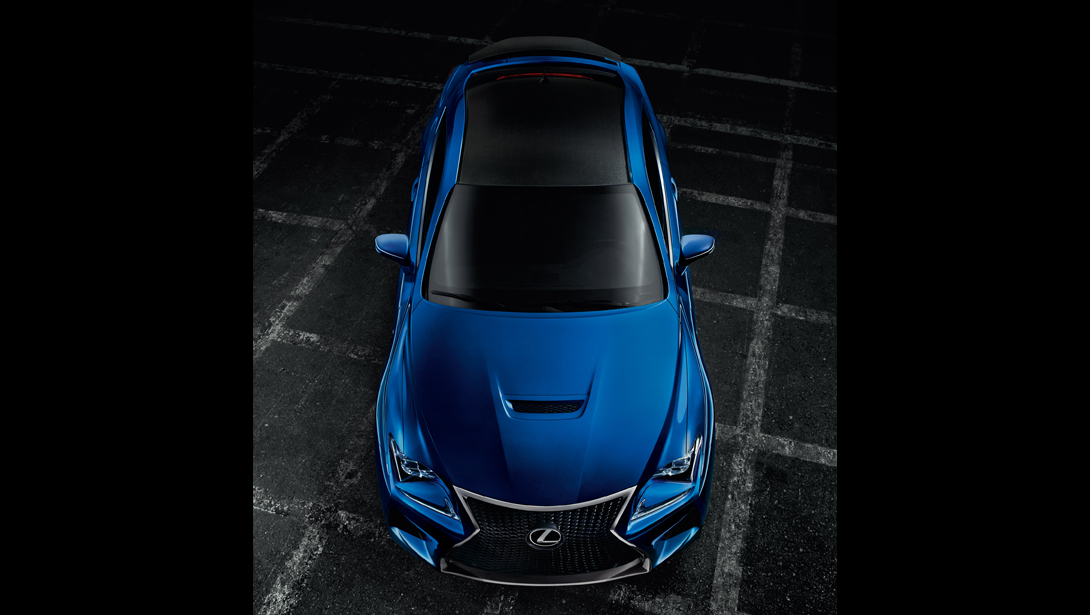 Let’s face it, who doesn’t like to go fast? Whether you are a CEO, soccer mom, college student or anything in-between most everyone loves the thrill of speed. As your pulse rate climbs, the hair on the back on your neck stands up right and that natural high of flying across asphalt courses through your veins all while a roaring machine serves as your chariot to this oasis of adrenaline. There is just something that the feeling of going fast gives off that infatuates us as human beings. It especially hooks the people at Lexus and for the first time ever they want to show the people just how much they like to go fast. For the first time in the company’s prestigious history they are releasing three of their new cars on the race track. Never before has Lexus released any of its vehicles on the track to dealers but these cars are different. Each new model Lexus is releasing is inspired from the asphalt up with speed at the fore front of each design.

The new 2015 NX is Lexus’ first ever compact crossover with a turbo charged engine. It is a car that takes everything Lexus is known for: quality, fuel efficiency, reliability, comfort,  etc and adds a 2.0-liter, direct-injection, 235-hp, 258-lb-ft torque, 17-psi of boost. In America the 2015 Lexus NX will be available in a two variants, the Hybrid and the Turbo, with AWD available for both and the F-Sport package. Lexus is looking to make quite a slash with these new models and the NX is just where they are getting started when it comes to speed.

The 2015 RC F has a powerful and refined V8 that promises to take both the track and street with its own aggressive style. Under the hood that 5.0-liter V-8 is rated at 460 hp mated to an eight-speed automatic with paddle shifters and a special torque-vectoring differential. The chassis is specially tuned and wider 19-inch wheels are fitted to provide the car with tremendously precise handling. The interior on bot the 2015 RC and RC f models is impeccable with craftsmanship and materials that look just as this chic speed machine should. All three of these cars can run and run fast. The only thing Lexus doesn’t know is if you can handle it.

That is why Lexus is hosting its first ever “Running of the Bulls” starting off in Dallas, TX September 15-16 at Motorsport Ranch to give people a chance to feel the power behind all three of these new Lexus cars.  Lexus will be traveling the country showing off these cars and for a full tour calendar of where and when Lexus will be click here.

If you want to see more Lexus vehicles or just want to check out more on these new models come by Park Place Lexus Plano or Park Place Lexus Grapevine to see the nation’s largest stock of new and used Lexus cars. 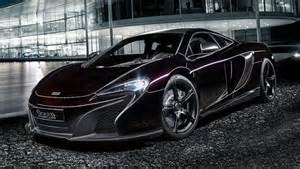 The McLaren MSO 650S was originally just a concept released in April, but after an overwhelming response McLaren has decided to produce a limited 50 Coupes and Spiders. The car debuted at the Goodwood Festival of Speed. The Festival of Speed as it is referred to in the United Kingdom is an annual hill climb featuring historic motor racing vehicles that is held in the grounds of Goodwood House, West Sussex, England.

The production model of the MSO 650S carries over many of the elements found in the Concept. Frank Stephenson, McLaren’s Design Director, has made many more changes including a number of carbon fiber styling upgrades, a three-piece rear bumper with carbon fiber center section and a more aggressive rear diffuser.

The MSO Concept came in Agrigan Black, but the production version will be available in ‘Papaya Spark (a take on McLaren orange), Sarigan Quartz (new metallic silver with gold infusion) and the Agrigan Black of the concept.

The body upgrades and special paint finishes are set off with a set of Palladium 10-Spoke super lightweight alloys with a diamond cut effect on the inside edge of the spokes and kept in place with titanium wheel nuts.

Inside, the MSO 650S gets black leather and Alcantara, with carbon fiber accents gloss black vents, a carbon fiber ‘MSO’ sill panel and a dedication plaque noting the limited edition. Each example will ship with a Frank Stephenson-signed sketch and an MSO-branded “holdall,” similar to a leather dufflebag in the United States. 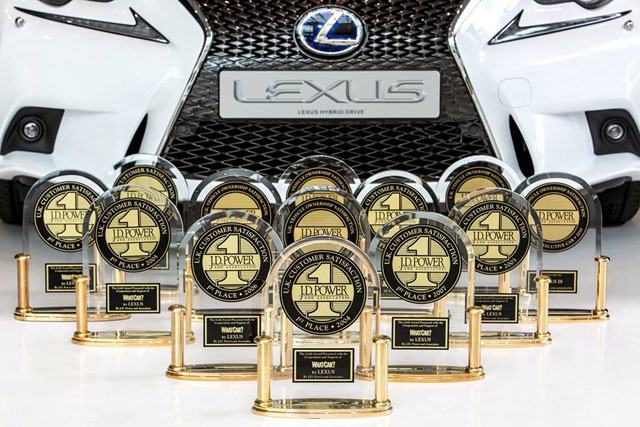 When it comes to dependability, the world knows that winning the JD Power award is the apex. This year Lexus again took the top spot in J.D. Power’s 2014 U.S. Vehicle Dependability Study – now three straight years. The Japanese auto maker has averaged 40 fewer problems per 100 vehicles than the second closest manufacturer, and that’s a lot. The 2014 Lexus ES, LS, GS, GX and RX won individual awards as well, each coming in top of their class. Although Lexus lost the top ranking in 2009-11, it had been on top of the survey for 14 years before that. All this being said, the Lexus brand stands as the cornerstone of quality and dependability in the automotive industry. Lexus’ constant “Pursuit of Perfection”, partnered with its penchant for innovation, has helped this automaker establish itself as quality manufacturer. Their vehicles exude class, comfort, efficiency and most of all dependability.

If you are looking for a car that is made to be more reliable than any other on the road, then you should check-out the impressive inventory of new and pre-owned Lexus vehicles at  Lexus Plano or Lexus Grapevine. 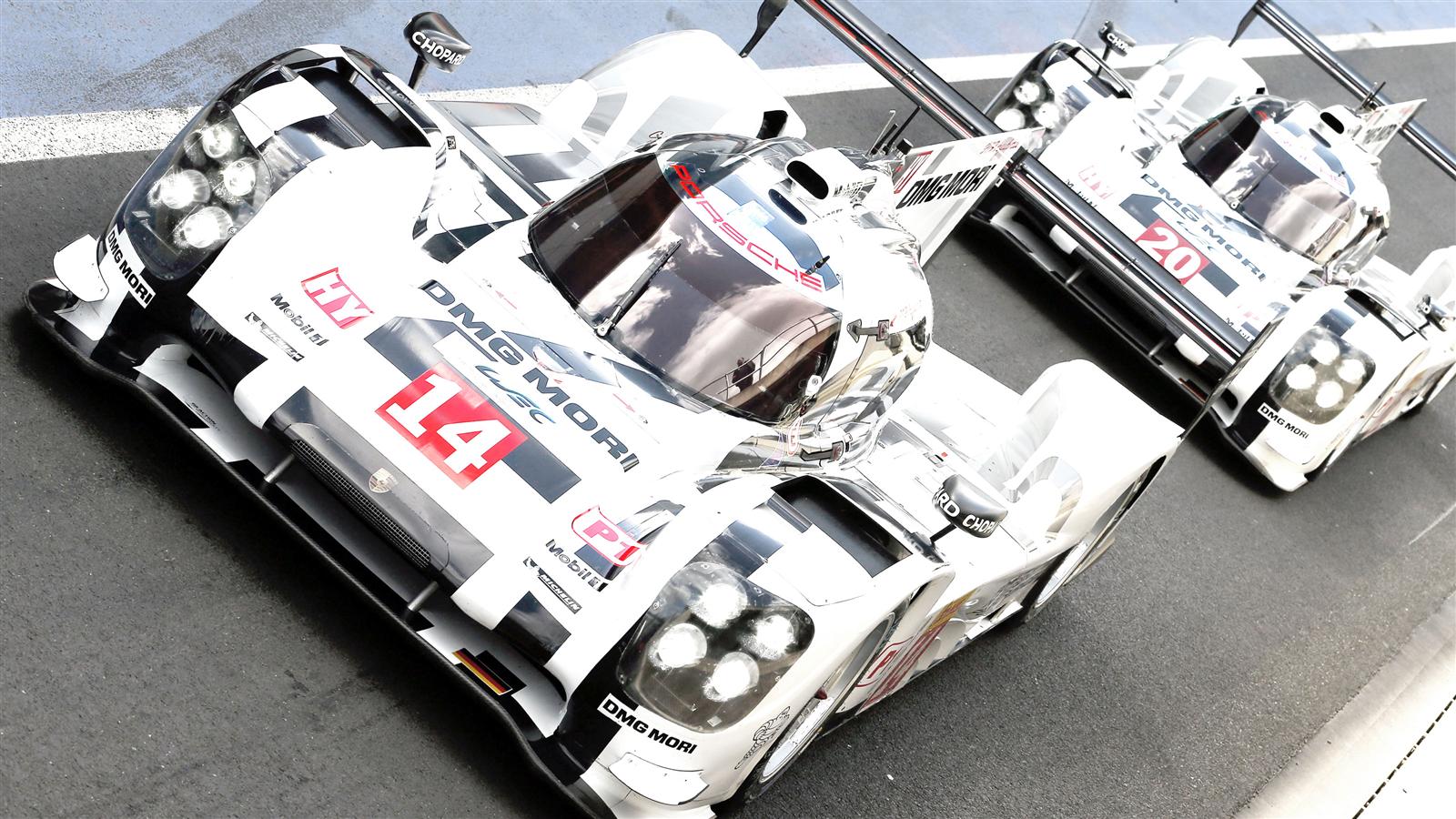 After a 16 year hiatus, Porsche will once again compete in the top category of what is certainly the world’s toughest car race. In Le Mans, France starting at 3:00 pm on June 14, 2014 Porsche’s attempt to return to glory will begin. Le Mans is a 24 hour long race that consists of only the world’s finest and fastest car, drivers and teams. With 56 cars in the field and over a quarter million spectators in the grand stands Le Mans has been known around the globe by all speed enthusiasts as the premier race since 1923. When it comes to top class automotive engineering, performance and innovation there is no other race that comes close to Le Mans. This is the race where legends are made; the difference between agony and ecstasy is measured in millimeter and milliseconds.

Porsche is a record holder at Le Mans with 16 overall victories, the first in 1970 and the last in 1988 along with being the first to ever win with a turbo in 1976. Yet this year the legendary sports car manufacturer has no experience to benefit from due to its absence over the past 16 Le Mans. For the first year of the LMP1 project the target is to get one of the fast Porsche 919 Hybrids to the finish line at the marathon. The Porsche team consists of 86 members and each of them known the tradition of excellence that they place on their shoulders once they put on the Porsche crest.

Porsche is fielding its most innovative prototypes at the 82nd 24 hours of Le Mans. The two Porsche 919 Hybrid cars with start numbers 14 and 20 will be driven by two trios of drivers: Romain Dumas (France), Neel Jani (Switzerland), Marc Lieb (Germany) and Timo Bernhard (Germany), Brendon Hartley (New Zealand), Mark Webber (Australia). These six world-class drivers have between them a total of 37 appearances at Le Mans.

With Le Mans being the apex of automotive creativity and competition there are some new regulations this year. These new guidelines call for a totally new LMP1 car with an enclosed roof and increased visibility zones to improve the safety of the driver. Other new regulations aim to reduce fuel consumption by 30% in the last 21 years. They hope to accomplish this monumental feat by having all the manufactures utilize hybrid technology through both the recovery of kinetic energy through state of the art breaking systems and the reuse of exhaust from the turbo charger.

As the Porsche team hits the track in hope regain its status as a Le Mans powerhouse you can show your support for the team by putting the crest on your chest as well. Park Place Porsche has a huge selection of Porsche accessories and clothing items available to let every race fan show their support. 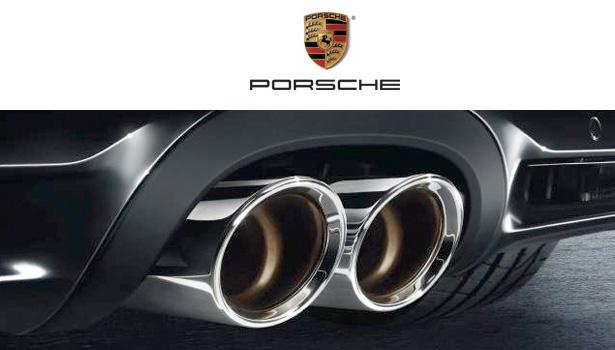 3, 2, 1, go. You feel it – those chills down the back of your spine, goose bumps cover your skin, the hair on the back of your neck raises. You feel that lethal combination of nervous and excited, then all at once the rush hits you. Adrenaline pumping through your veins from a sound that runs through the memories of your childhood when you used to watch your older brother and his friends tinker with and race cars.

It is a sound like the roar of the king of the jungle, but at the same time is unmistakable as a man’s machine. It is that sweet purr your ears are blessed with when you press the gas pedals to the floor board. When you sit behind the steering wheel of a Porsche, place your heavy foot on the pedal until the floor pushes back at you, the sensation is intensified tenfold and the people at Porsche know that.

That is why the good people of Porsche have created the Porsche Exhaust Sound Bites/ Audio Clips. They provide a chance for anyone who wants to experience the hair raising sensation of hearing the roar of a wide variety of the legendary automakers’ vehicles’ exhaust systems. Go ahead click around. Enjoy the almost sensual sound of a Porsche 911 Carrera (997) or listen to the smooth scream of the Boxster 981.

If just hearing the sound isn’t good enough for you or simply hearing it is music to your ears leaving you wanting more or maybe even wanting one of your own, you should come by Porsche Dallas located on 6113 Lemmon Ave Dallas, TX 75209. Here you can see, hear and feel any one of Porsche’s moving works of art in person.  We have nation’s largest selection on new Porsche cars for sale and are the number one used Porsche dealer in the country.

We promise to provide you with an unrivaled world class experience in customer service at Park Place Porsche Dallas.

Click on the vehicle exhaust image to hear each Porsche exhaust system in action.