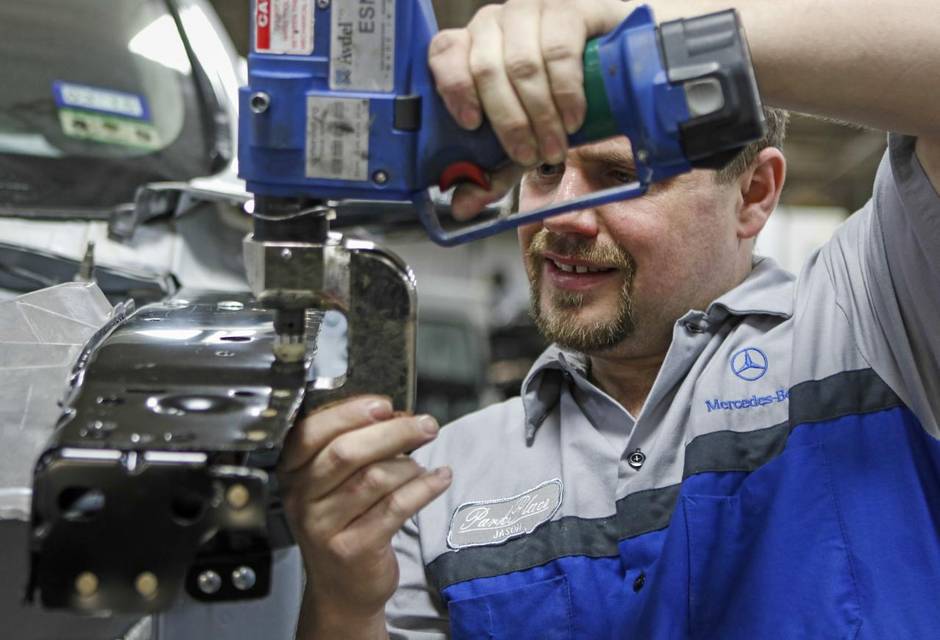 Most of the body shop techs at Park Place Dealerships cringe when they see the word after-market in a repair order.

Too often, after-market parts — any part not made by the original manufacturer — “just don’t fit,” said Eric McKenzie, director of body shop operations for the Dallas-based group of high-end dealerships.

After-market parts cost substantially less than original components from an automaker, but “the bottom line is they are not the same parts,” McKenzie said.

He and other body shop operators are pushing back against insurance companies, which frequently require shops to use the cheaper parts and even specify how much time they should spend on repairs.

“It all started with cost discounts on repairs, but then they began wanting changes in labor rates and telling us which parts we should use,” McKenzie said. “When an insurance company controls a shop’s profits, they have to take shortcuts.”

The insurance companies created the system, and large companies like State Farm say the direct-repair programs save consumers money.

“State Farm certainly understands the need for repair shops to remain vibrant and healthy,” spokesman Gary Stephenson said. “We also have a high interest in repairs being done at a reasonable cost.”

More than a decade ago, State Farm, the largest auto insurance company in the U.S., was sued over the use of after-market parts in repairs.

Since then, Stephenson said, State Farm has “discontinued prescribing” after-market parts in most repairs.

Most insurance companies, however, continue to demand them, body shop operators say.

The parts are generally 20 to 50 percent less expensive than OEM (original equipment manufacturer) parts from an automaker.

But they are just one of the issues that unite Park Place Dealerships, Sewell Lexus, Classic Chevrolet in Grapevine and others that have joined the year-old Auto Body Association of Texas.

The association wants to negotiate changes in direct-repair programs — although it hasn’t gotten much response so far from insurance companies.

The programs go by various names — preferred service providers, concierge auto repair, etc. — but they tend to work in the same way.

Insurance companies sign agreements with body shops, promising to recommend those shops to policyholders in return for the shops’ following certain cost and repair guidelines.

Shops in the network must agree to do the work at a prescribed hourly rate — $44 an hour in the Dallas area, McKenzie said. That amount is intended to cover the shop’s overhead as well as the tech’s wages.

“Just as a way of comparison, most lawn mower shops get $80 an hour,” McKenzie said.

Some collision repair businesses — such as Park Place’s Bodywerks shops — refuse to participate in the programs, but they still have to fight the insurance companies to get higher pay.

“They just tell you, ‘Everyone else accepts that rate. Why can’t you?’” said Burl Richards, who owns Burl’s Collision Center in Henderson and is the head of the Auto Body Association of Texas.

In addition, insurance companies insist on applying that hourly rate regardless of the amount of high-tech equipment a shop might have or the experience and training of its techs.

The new 45-member association would like to get consumers involved in the issue.

“When consumers get mad and start hopping up and down, that will get everyone’s attention,” Richards said.

More than 500 shops across the country have joined a lawsuit against the nation’s top insurance companies, contending that insurers send consumers to shops that spend a minimum to fix vehicles — and fail to restore them to their pre-accident condition. The Texas group and its dealers haven’t joined that suit so far.

And U.S. Sen. Richard Blumenthal, D-Conn., recently urged the Department of Justice to investigate the collision repair business because much of the work is being done with after-market or used parts that could affect safety.

Honda crash-tested a vehicle with after-market parts on it and found that the parts — which are often lighter than original pieces — affected the timing of air-bag deployment.

“I have been in this business my whole life, and I have never seen shops so galvanized,” said Richards, 48. “It’s because it’s getting harder and harder to do repairs right.”

The association says consumers need to understand that they can take their vehicles to any shop they want, not just those in an insurance company’s network.

“The insurance companies tell customers that they can get their cars repaired faster at one of the program shops and that the work is guaranteed for life,” McKenzie said. “Every reputable shop guarantees their repairs for life. It is just feel-good talk.”

Twenty years ago, the direct-referral programs seemed like a good deal for body shops.

Insurance companies encouraged their customers to use one of the program shops, and the shops were authorized to begin repairs immediately. In return, the shops documented the damage and specified what needed to be done to repair a vehicle, speeding up the process.

But over time, the insurance companies started adding cost-cutting measures to the agreements, specifying which parts could be used in repairs and the amount of time that could be charged for repairs, McKenzie said.

The stipulations gained extra clout when collision repair chains such as Richardson-based Service King and Lewisville-based Caliber Collision, which rely on volume repairs, accepted them. Officials with both companies declined to comment about the insurance company programs.

Park Place is not part of any network, but insurance companies expect its shops to follow the same directives for parts use and repair costs.

“Some insurance companies won’t pay you to blend the new paint with the color of the other panels,” McKenzie said. “So some shops do it anyway and just eat the cost. We do.”

Insurance companies often insist on using after-market body panels for big repairs such as damage to hoods, fenders, doors and bumper assemblies. But in many cases, the shops say, they won’t fit. The shop has to either modify the part or negotiate with the insurance company to use an original manufacturer’s part.

“In a lot of cases, the after-market companies use old dies to cast metal parts, so the edges of the die are rounded and the panel is not exact or holes that should be round are oval,” McKenzie said.

The insurance companies, meanwhile, contend that automakers’ parts are priced too high — meant to earn profits for both automakers and their dealers.

While that may be true to some extent, the automakers designed and tested the parts, and they guarantee their integrity, McKenzie and Richards said.

“The quality of the after-market parts is horrible, particularly the foreign-made stuff,” Richards said. “A manufacturer’s hood and headlamp have a 99 percent chance they will fit. I don’t know what the percent is with after-market parts, but a lot of times we end up having to drill new mounting holes in the part and work with it to get it to fit — and it will still have gap issues.”

Poor fit and finish in a repair can cause additional depreciation in the value of the vehicle.

Some insurance companies won’t even pay to have the new paint on a repaired vehicle buffed out, Richards said.

“The thing is, we and lot of other shops do it anyway, even though we don’t get paid,” he said. “You have to. It comes down to your reputation.”

The Auto Body Association of Texas tried to get the Texas Department of Insurance and state legislators involved in the issue, but none has expressed any interest, Richards said.

“I don’t hate insurance companies,” he said. “I hate the way they do business. There’s got to be a way to do this and not hit consumers with higher insurance costs.”

“Insurance companies are partners we need,” he said. “But repairs are just not being done properly anymore.”