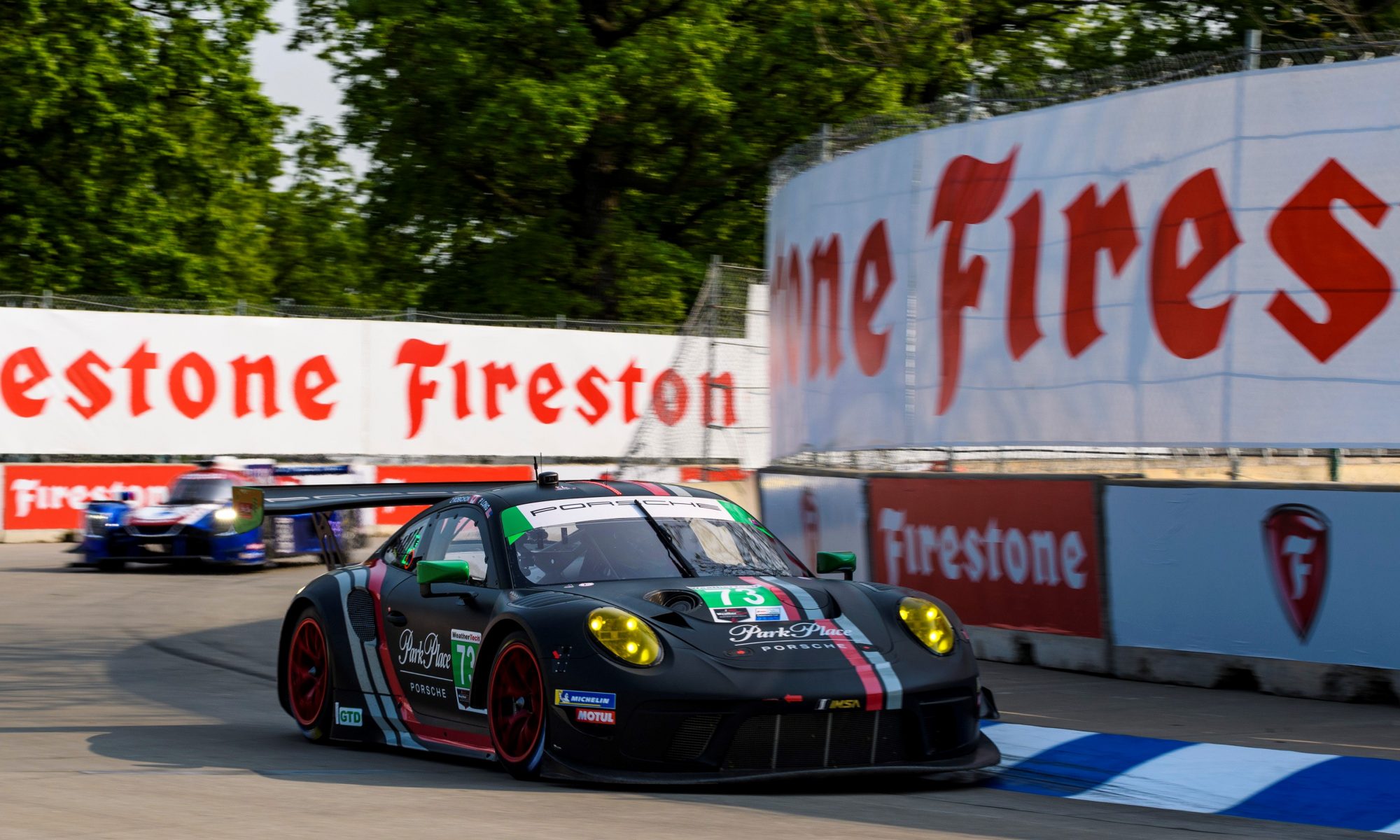 Park Place Motorsports second-place finish came after leading nearly half of the 100-minute race. Both drivers took turns out in front of the GT Daytona Class. With 47-minutes remaining Long was passed in the tight confines of Turn 5. While he fought off multiple competitors the No. 14 Lexus of Richard Heistand and Jack Hawksworth slipped past Long and kept the No. 73 Park Place Porsche 911 GT3 R hot on its heels until the checkered flag.

Though Long spent much of his stint hunting down the leader, teammate Robichon had a very different race. Robichon inherited pole position and never relinquished the lead. He led the GTD field for 42 minutes opening up a 2.3-second gap over his competitors. Robichon conquered two of the five restarts with ease. A perfect pit stop kept Long in the lead after the driver change.

Park Place Motorsports second place finish at Detroit is highlighted by earning the new Porsche 911 GT3 R first pole position in North America. This is also the first GTD Class podium of the 2019 IMSA WeatherTech SportsCar Championship season for the manufacturer. In Championship Points Standings Long moves up into third for the Drivers’ Championship and second in the WeatherTech Sprint Championship.

Calendar
Up next for Long is the Official Le Mans Test at the Circuit de la Sarthe in Le Mans, France. Team Principal and co-driver Patrick Lindsey will fly Long as well as other IMSA drivers to the test where he will also compete. The Park Place sponsored No. 56 of Team Project 1 of Lindsey unveiled its art livery by Richard Phillips for the 24 Hours of Le Mans ahead of the test. The next event for the IMSA WeatherTech SportsCar Championship is June 30 at Watkins Glen International.

“It was a fantastic weekend with Park Place Motorsports,” Robichon said. “I’ve never raced with Park Place before or raced at Belle Isle Raceway, so it was a weekend of firsts for me. Luckily this wasn’t my first street track and I was able to settle in pretty quickly.

“It was great working with Patrick Long and the whole Park Place Team. We were able to meld very easily and get up to speed in the car. It was a great race where we held the lead for a long time, we just missed out a little bit at the end and brought it home in second which was still exciting. This was my first time on the IMSA WeatherTech Sportscar Championship podium and my first podium with the Porsche 911 GT3 R. I’m glad we were able to be competitive and help Park Place move up in the championship.”

“I’m really proud of the whole Park Place Motorsports organization,” Long said. “We were at the sharp end of the field all weekend. The racer in me is disappointed and wants a victory for the team but the realists understands this is where championships are made or lost. The second yellow is ultimately where the plot twisted. The Lexus was able to drive by me on the back straightaway on that restart. We were better on the long run but a little bit low on pace on the short run. It was a great job by Zach and the whole team today.”