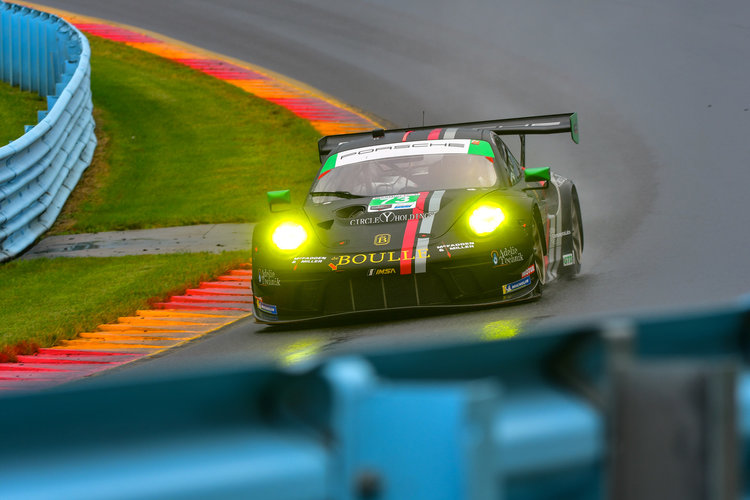 Park Place Motorsports enters the Hankook 24 Hours of COTA at Circuit of the Americas in Austin, Texas, with drivers Alan Brynjolfsson, Trent Hindman, Spencer Pumpelly, and a fourth driver.

This week’s race will be the first undertaking of the 24 Hours of COTA for Dallas based Park Place Motorsports. The inspiration to log additional miles in 2019 comes after Brynjolfsson regained the lead in the Porsche Cup standings after winning both SprintX West race in the SRO Pirelli GT4 America finale. German competitor Christian Reid now finds himself sandwiched between Brynjolfsson and Hindman, as Hindman respectively sits third.

The duo joined by Pumpelly will hope to upset the 24-Hour field and take home a win to offset the points potentially earned by Reid in the FIA WEC 4 Hours of Shanghai, which takes place Sunday, Nov. 10. An excellent finish could tip the scales in Brynjolfsson’s favor and give him the Porsche Cup win as well as a new Porsche 992. If Hindman hangs on to his current standing, he will take home a €25,000 Euro check.

The lineup will run the No. 73 Porsche 911 GT3 R, generation I, as opposed to the current generation II model, the team ran this season in the IMSA WeatherTech SportsCar Championship. While it will be a first for both Hindman and Brynjolfsson to be behind the wheel of a Porsche 911 GT3 R, it won’t be the first time they dominated at COTA. Brynjolfsson and Hindman took home two wins in the Pirelli GT4 America SprintX East series in early March for the kickoff of the 2019 SRO America season.

The weekend begins with private testing on Thursday, Nov. 14, followed by official practice on Friday, Nov. 15. GT Qualifying also takes place Friday with the 45-minute session set to go green at 3 p.m. CT. Friday concludes with night practice taking place from 6 to 7:30 p.m. Saturday, Nov. 16, sees the course go green for the first half of the 24-Hour race. The green flag drops at 11:30 a.m. with Part 1 coming to a close at 10:30 p.m. The final 13 hours begin Sunday, Nov. 17, at 8 a.m., with the checkered flag officially falling at 9 p.m. local. Watch Qualifying and the race live on the 24Hour Series YouTube page.

“No pressure, this next race will be pure enjoyment,” Brynjolfsson said. “I get to finally drive and experience the superior power, braking and downforce of a GT3 car; something that I can’t believe I haven’t done yet. I’m jumping right in with a 24-hour race, but I’m backed by some awesome co-drivers; Trent Hindman, Spencer Pumpelly and Richard Heistand. My only worry is I’ll get hooked and have to double my budget for next year.”

“Fortunately, the Park Place Motorsports/VOLT team had spent some time at COTA earlier this year with the Porsche Cayman GT4 Clubsport MR,” Hindman said. “It’s a technically demanding track where seat time usually reigns supreme. Having that recent experience of running there will help with Alan’s transition into a GT3 car for the first time. It’s awesome to be a part of his progression and I think he will adapt very well to the pace of the car. It’s just nice to have the band back together for one last time in 2019.”

“This will be my first time at COTA and in a Porsche GT3 R,” Heistand said. “As you can imagine I’m excited for the new experience and for the opportunity with Alan, Patrick (Lindsey) and Park Place have given me. When I returned to racing in 2018, I competed in Porsche Supercup so while the GT3 R is new to me, racing with Porsche is not and I’m very happy to be back in the Porsche family where it all started.”

“The 24-hour race at COTA will be my first time running this event and my first time driving with Alan and Trent,” Pumpelly said. “I’m looking forward to giving it a strong go and hopefully a top finish. The car is the one I raced in the Petit Le Mans in 2018 and I have a long history with Park Place. I know what each is capable of so if we can avoid the pitfalls that can lurk in any 24-hour race, we should do well. “