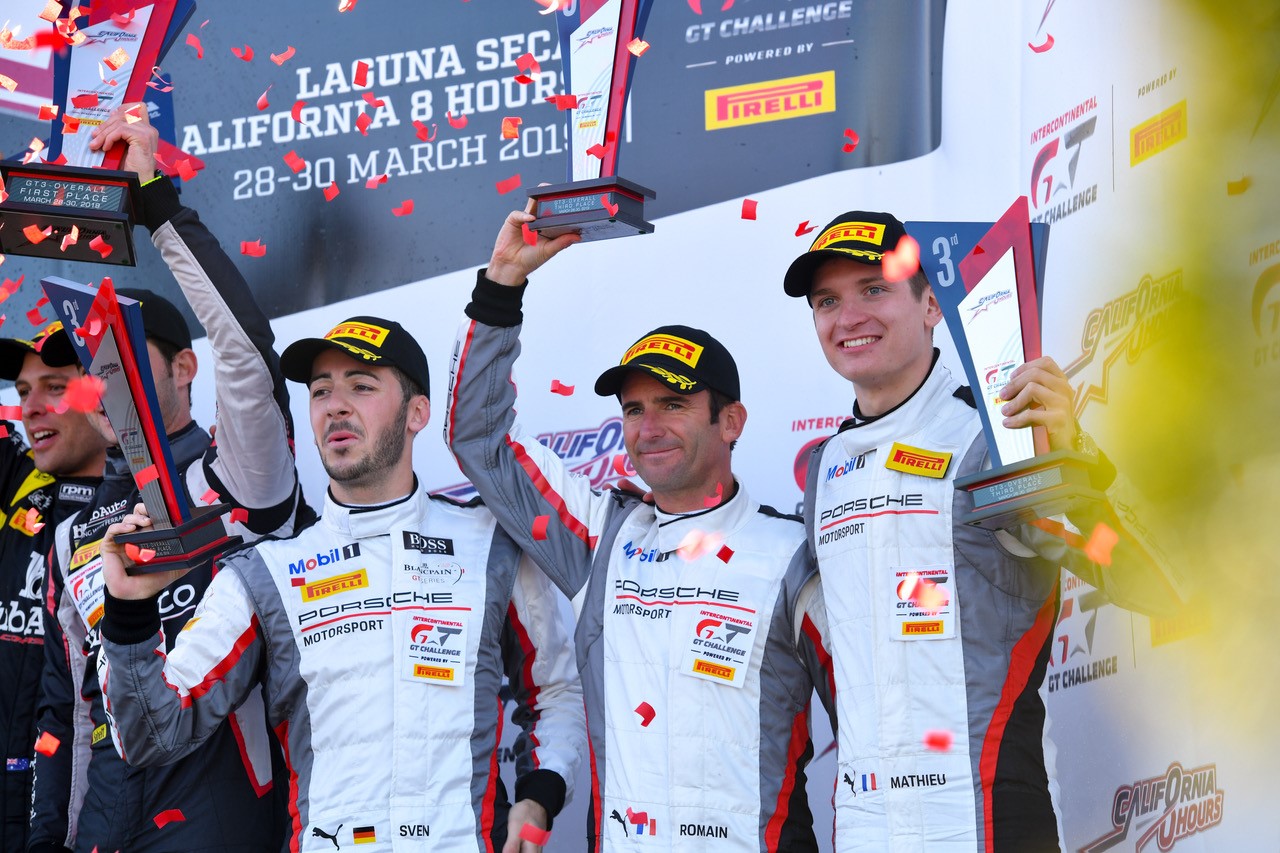 Park Place Motorsports debut appearance in the Intercontinental Blancpain GT Challenge series ended with earning Porsche Motorsport a third-place finish after eight hours of green racing. Works Drivers Romain Dumas (France), Sven Müller (Germany) and Mathieu Jaminet (France) collected the podium finish after overcoming braking complications which slowed the No. 911 before it was cleared to continue regular use. The No. 911 challenged to regain the lead back, but lap traffic impeded on Park Place Motorsports progress; ultimately settling the team with third place.

Today’s finish gives the Dallas-based team its sixth podium at Laguna Seca; the statistic includes five GT Daytona podium finishes in the IMSA WeatherTech SportsCar Championship. Park Place Motorsports has been a customer team of Porsche since 2012; this was its first appearance with factory support. Porsche Motorsport’s second podium in Intercontinental Blancpain GT Challenge competition comes after the manufacturer won the Liqui-Moly Bathurst 12 Hour in the opening round.

Post-Race Comments:
Patrick Lindsey (Park Place Motorsports Team Principal):“I couldn’t be prouder of our team’s debut in the [series] as they executed a perfect race, showing a new group of viewers the amazing talent, we have working under our tent.  There were challenges we had to overcome before and even during the race weekend.

“We count ourselves lucky that our Porsche family was there in the form of Porsche Motorsport, PMNA and fellow Porsche team Wright Motorsports to help aid in our learning curve. The level of intensity was high from the moment we first learned about the effort to put a car on the track at the 8 Hour to the very last lap. This is a big momentum builder for our team members and of course a spectacular outcome for Porsche and our partners at Park Place Porsche.”

Romain Dumas (Porsche 911 GT3 R #911):“A podium position is very good, but it would have been possible a bit more. It was a tough competition over the whole distance. In the end, we didn’t miss much to win. For the new Porsche 911 GT3 R it was the first podium place in this enormously competitive series. Now we’re going to analyze this race in detail and show off even better at Spa”.

Sven Müller (Porsche 911 GT3 R #911):“We are satisfied because a podium position is always a nice reward. We gave it our all, were flawless on the way. We were in the race for the first time with Team Park Place Motorsports in the USA. Considering that, it was a strong all-around performance.”

Mathieu Jaminet (Porsche 911 GT3 R #911):“It’s a good result. Nevertheless, after the many leading laps, we had calculated more in the meantime. We had a little bad luck in traffic. Two competitors were able to make a profit out of it. You can’t do anything about that. After eight hours of races under green flags, we were only 20 seconds behind the winners. Everyone in the team can be very proud of that.”