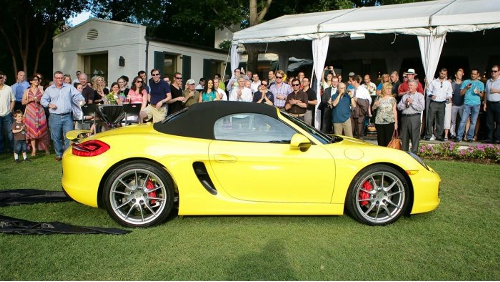 The all-new 2013 Porsche Boxster: The lighter, more muscular, more distinctive and more fuel-efficient sports car Arrives in Dallas. Never before in the history of the Porsche Boxster has a change of generation been so comprehensive.

Park Place Porsche unveiled the new 2013 Porsche Boxster at the Dallas Arboretum and announced a $5,000 donation was made to The Family Place to help victims of domestic violence. The third-generation of the highly regarded Porsche sports car has arrived in the Dallas showroom and is now on sale.

Never before in the history of the Porsche Boxster has a change of generation been so comprehensive. The new Boxster weighs up to 77 pounds less than the previous generation while riding on a longer wheelbase and a wider track. Larger wheels, a restyled interior reminiscent of the Carrera GT supercar and a redesigned, fully electric top that now opens and closes in nine seconds help make the hi-performance roadster even more livable for everyday use.

“This is the classic mid-engine Porsche pairing,” said Patrick Huston, general manager of Park Place Porsche. “The new Boxster and Boxster S have been thoroughly updated with aggressive styling and more powerful engines, while being more comfortable and fuel efficient. With optional features like Porsche Torque Vectoring (PTV) and the Sport Chrono Package, these perfectly balanced mid-engined roadsters, now in their third-generation, are an absolute blast to drive.”

Both the Boxster and the Boxster S are powered by flat-six engines with direct fuel injection and a highly efficient electrical system recuperation feature, thermal management and a Stop/Start function. The base model’s new power unit delivers 265 hp from an engine displacing 2.7 liters and provides ten hp more than its larger displacement predecessor. The 315 hp 3.4-liter engine of the Boxster S now delivers five more hp than before.

Both models are equipped with a manual six-speed gearbox as standard with the seven-speed Porsche Doppelkupplungsgetriebe (PDK) transmission optional and both versions achieve their best fuel consumption and acceleration with the PDK. With no power flow interruption during gear changes, the Boxster sprints from zero to 60 mph in as little 5.2 seconds, the Boxster S in as little as 4.5 seconds. The EPA rates the Boxster at 32 mpg highway, and the Boxster S at 30 mpg with the PDK.

About Porsche Cars North America
Porsche Cars North America, Inc. (PCNA), based in Atlanta, Ga. is the exclusive U.S. importer of Porsche sports cars, the Cayenne SUV and Panamera Gran Turismo. Established in 1984, it is a wholly-owned subsidiary of Porsche AG, which is headquartered in Stuttgart, Germany, and employs approximately 220 people who provide parts, service, marketing and training for 196 dealers. They, in turn, work to provide Porsche customers with a best-in-class experience that is in keeping with the brand’s 63-year history and leadership in the advancement of vehicle performance, safety and efficiency. At the core of this success is Porsche’s proud racing heritage that boasts some 30,000 motorsport wins to date.

Jerry Reynolds, the Car Pro – takes a ride in this 2012 Porsche Carrera 911 and gives his expert opinion on the ride, amenities, performance and style – as well as the price. From what we can tell, Jerry really likes the new 911 – and feels the style is even more luxurious – whilst retaining super high-performance standards.

With a price tag around $850,000 – this car is setting a new set of standards standards with a predicted top speed of 202 miles per hour – and a maximum fuel efficiency of 78 miles per gallon.

Development is now in the late stages, and Porsche claims production will begin in September. Porsche also confirmed that the first customers will receive their car in 2013.

Patrick Long, three-time ALMS GT2 Driver’s Champion and Le Mans winner – spends some quality time with the Porsche GT3 RS 4.0. He is also Porsche’s only American Factory Driver. While at the Porsche Sport Driving School at Barber Motorsports Park in Alabama, Patrick helped fellow Porsche driver Hurley Haywood by testing to see how fast he could grab a cup of coffee.

The Porsche Carrera Cup is one of the most thrilling single marque racing Championships in motorsport and this year sees Carrera Cup Great Britain celebrate 10 years of successful racing at some of the world’s most well known race tracks including Silverstone and Brands Hatch. Over the years motorsport fans have been treated to many memorable races as drivers compete in the iconic 911 GT3 Cup car. We spoke to a number of teams at the first round of the 2012 season about what’s so special about competing in Porsche Carrera Cup and asked what memories they have of their involvement over the past 10 years.  See more video from the Porsche Channel, YouTube.

“Purist” is what Porsche uses to describe the new Porsche Cayenne GTS. The designers and engineers at Porsche chose this particular term as ‘purism’ is the inspiration behind the refreshed design and performance enhancements of this new model.

Today we say goodbye to the designer of the legendary Porsche 911 – Ferdinand Alexander Porsche.

Porsche announced today that the grandson of Dr. Ferdinand Porsche, who founded the company in the 1930’s, died today in Austria at the age of 76. The cause of death was not mentioned.

Ferdinand Porsche designed the classic 911 in the 1960’s died today in Austria at the age of 76. The sleek elements of his design have been the cornerstone for seven generations of Porsche 911, and now are also very prominent in the brand’s other models such as the Cayenne, the Panamera and the Cayman.

“The creator of the Porsche 911 has founded a culture of design in our company that distinguishes our sports cars even today,” Porsche CEO Matthias Mueller told the Associated Press today.

Porsche has really hit the mark with it’s 918 Spyder Hybrid Super Car – with a monster that surpasses all standards for efficiency, performance and design – all at the same time. In the beginning, the 918 Spyder was only a concept, but Porsche has confirmed recently, that it will go to production.

With an expected price tag just under $900,000, the Porsche 918 Spyder will be able to go from 0-60 in less than a whopping THREE seconds – while hitting 124MPH in less than 9 seconds. To make it even more amazing, Porsche projects that the fuel efficiency will be no-less spectacular – averaging over 70 miles per gallon.

For design, it looks a bit like a mix between the iconic Porsche 911 and the prior super car, the Porsche Carerra GT.

Porsche recently invited members of the press to the test track, in Nardo, Italy.

Once again, the Porsche Boxster and Porsche Cayman have made the top ten best cars list according to Car and Driver. We’re not surprised – the Boxster alone has made the top ten list on Car & Driver 12 times since it’s debut in 1998, and it’s the Cayman’s honor now – six times in a row.

Click here for the full article on Car & Driver.