For nearly a century, Volvo has been producing automobiles, and almost for the entire existence of the manufacturer Volvo cars have been known for being the safest on the market. This tradition of excellence continues into modern day with the introduction of the Volvo City Safety technology: the newest in groundbreaking technologies helping to preserve not just your car, but also the health of you and your family.

The core of City Safety is a laser, attached to the back of the rear view mirror and invisible to the naked eye, that scans the area one car length in front of the Volvo automobile. If the sensor notices that the car in front of the driver is stopped or slowing, it has the power to apply the brakes on its own in an attempt to avoid an accident. With a speed difference between the two automobiles of 9 miles per hour or less, City Safety will avoid an accident outright. At speeds of up to 19 miles per hour, it is unable to avoid an accident, but the perfect response time of the system will result in far less damage than sustained with the system keeping watch.

There are some limitations on the system: at speeds of 20 MPH or above, City Safety will not automatically apply the brakes, due to the dangers of braking without driver expectation at that speed as well as the risk of false positives when scanning at an increased distance. It will also not notice a pedestrian or other small object in front of the car, limiting only to what it is sure is an automobile.

Nevertheless, the data about City Safety’s effect on the accident rates is in, and it is extremely positive. The Highway Loss Data Institute, the information-gathering arm of the Insurance Institute for Highway Safety, found that automobiles equipped with Volvo City Safety suffer 27% fewer property damage claims than those without, compared with comparable midsize SUVs from other manufacturers as well as Volvo cars without the feature. Even more impressively, bodily injury liability claims were reduced by a staggering 51% thanks to accidents greatly reduced in severity by the earlier automatic braking.

City Safety was introduced in 2010, appearing on Volvo XC60 midsize SUVs with S60 sedans joining in 2011 and XC70 wagons and S80 sedans being equipped for 2012. For the kinds of low-speed impacts that City Safety prevents, human reaction time is one of the greatest challenges; the automatic braking is activated with the instant reaction time of a computer, the driver is not aware it is happening until the accident has already been avoided. The braking power is strong at 50% of maximum in which the driver will receive a jerk forward, but it will never be so violent as to cause him/her to impact the steering wheel or dashboard under normal circumstances. A light on the dashboard will alert the driver after City Safety activates.

Since the laser used is infrared, it is invisible to both the driver and all oncoming motorists – no one will be distracted by a red light flashing in their eyes as you approach. It works equally well in both day and night conditions. Since it only has to read eighteen feet in front of the car, most inclement weather will not affect it, but very heavy rain or snow may impede its performance. It is specially configured to avoid activating when attempting to park or weaving through parked cars, and can be temporarily overridden by pressing on the accelerator – but there is no way to deactivate it for good, as it will turn on again the next time the car is started.

The effects on insurance claims are clear: drivers of Volvos with City Safety file fewer claims and recover less insurance money than those without the feature. Interestingly, even though the total amount claimed for insurance is lower, the amount of the average claim is about 10% higher than other vehicles, which means the system is working. City Safety avoids the small claims for fender benders by avoiding those accidents entirely the claims that do get filed tend to be for more serious damage.

For now, the effect on insurance rates is negligible as the IIHS examines the data, but there is reason to believe you may end up saving on insurance payments in the long run. The National Highway Traffic Safety Institute recently released their own report stating that the system reduces low-speed collision severity and eliminates many collisions entirely, strengthening the argument for reduced insurance payments in the near future.

Regardless of the immediate savings on insurance payments, the time and headaches saved from avoiding fender benders and the additional safety afforded to you and your family make the City Safety technology an invaluable asset in your new Volvo. 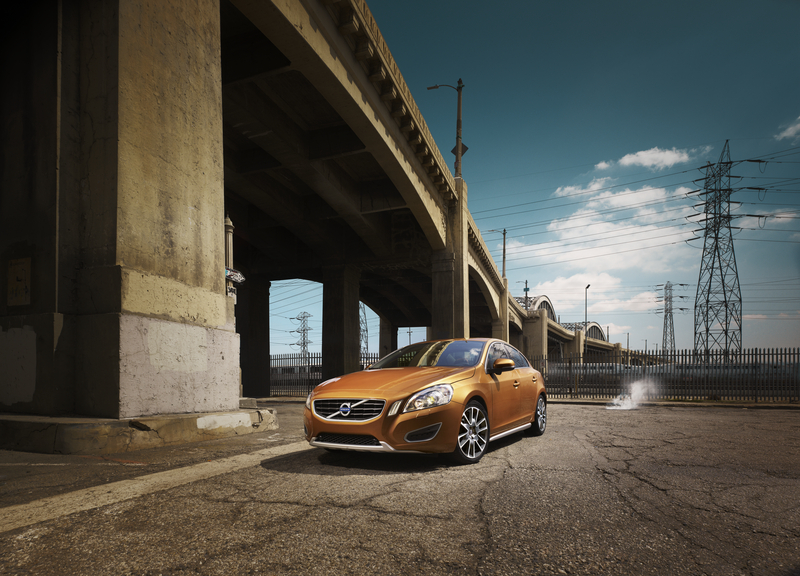 DALLAS, TX (Aug. 23, 2012) — The 2012 Volvo S60 earned a top rating of “good” in the Insurance Institute for Highway Safety’s (IIHS) new small overlap frontal crash test, making it the highest-rated European luxury vehicle among those tested. The Volvo S60 was rated higher than the Infiniti G, BMW 3 Series, Acura TSX, and the Audi A4. The Acura TL was the only other vehicle to earn a “good” rating.

“When we decided to build a world-class sports sedan we made sure it was a great Volvo first and foremost,” said John Maloney, president and CEO of Volvo Cars of North America. “We set the benchmark on safety, and we continue to lead the crowd.”

To learn more about the award-winning Volvo S60 sports sedan visit Park Place Volvo located in Dallas, TX or visit us at dallasvolvo.parkplace.com.

A Spanish motorway played host to a convoy of self-driven cars on a 125-mile journey, in the first public test of such an endeavor.  Each car was linked via a wireless connection, in groups – mimicking a manned vehicle as the group ‘lead’.  Volvo, who developed this ‘road train’ is convinced that it will be widely available in the very near future – heralding a new age of ‘relaxed driving’; Volvo says drivers “can now work on their laptops, read a book or sit back and enjoy a relaxed lunch” while driving.

Imagine the thrill of buying a new car and driving it home from the dealership for the first time. It’s fun and exciting to explore all the features and gadgets. But now, Volvo owners can experience something much more magical when they travel to Sweden and drive their new Volvo off the factory floor.

“We offer clients the ultimate new car ownership experience when they purchase their Volvo at Park Place through the Overseas Delivery program,” said Germaine Ambres, a sales associate with Park Place Volvo. “When our clients purchase a new Volvo, we fly them to Gothenburg, Sweden to pick up the car and then they have the option to travel through Europe in their brand new Volvo. Not only do our clients receive a free trip to Sweden, they also get a significant discount off the MSRP of the car when they purchase through the Overseas Delivery program.”

The buyer kicks off the adventure with two nights in Gothenburg, Sweden, the home of Volvo Cars. Upon delivery, the new owner can explore Europe at their own pace with Swedish vehicle registration and complimentary car insurance for up to 15 days.

“My five-year old daughter and I spent a magical four days in Gothenburg while picking up our new V50,” said Gerard Goh, a Park Place Volvo client. “The entire travel process was a breeze with limousine service to and from the airport. The Volvo factory tour was a real eye-opener to me, but the best moments were spent exploring the city.”

When the trip is over, Volvo will ship the car back home at no extra charge. U.S. Custom Duty, port clearance fees and inland transportation are all included in the purchase price.

To learn more information about the Overseas Delivery program, call Germaine Ambres with Park Place Volvo at 214.956.5521. Park Place Volvo is located at the intersection of Inwood Road and Lemmon Avenue, near Love Field in Dallas.

This month marks the 85th Anniversary of Volvo.  In honor of this celebration, MotorTrend magazine identified its favorite 8.5 Volvo models produced over the last eight and a half decades. The top 8.5 picks were:

Read more on the history of Volvo and specifics on each model  in the  full article on MotorTrend.com

The Car Pro Show pro and host, Jerry Reynolds, took some time this week to review the 2012 Volvo XC70.

Volvo has been known for safety for years. They have kept safety at the forefront of design and have done so in an innovative way – using ever-changing technology to keep drivers and their passengers safe. Now, Volvo has taken safety to the next level – offering protection to those outside of the vehicle via the “Pedestrian Detection System” – which is, in essence – a pedestrian detection system – and now, a pedestrian airbag of sorts.

The Volvo Pedestrian Detection system, which scans the road using sensors and a camera and automatically stops the vehicle when a person is in its path, debuted two years ago on the new S60. Now, Volvo is adding another layer of protection by introducing an airbag that inflates when sensors in the front bumper detect physical contact with a pedestrian. This causes a section of the hood to rise and a U-shaped airbag to inflate, covering about a third of the windshield and the bottom of the car’s A pillars and cushioning the blow for anyone unlucky enough to get hit and tossed onto the hood.

This week, at the Geneva Auto Show, the Swedish car maker is unveiling this new safety innovation, sported on a five-door hatchback – she Volvo S40.  It’s sporty, and safe – wielding this new technology as well as a hip panoramic glass roof and front grill to add to the aesthetics of it all.

Park Place Volvo in Dallas has been awarded the Volvo President’s Club award, now for the second time since taking ownership of this Volvo dealership. Only a handful of Volvo dealers across the country are bestowed this honor each year, and Park Place Volvo is the only dealer in the state of Texas to receive this award for 2011.

“Our team has worked hard to earn the recognition associated with the Volvo President’s Club award, and I am very proud of them” said Rob Schweizer, General Manager of Park Place Volvo. “It is an honor to be included on the list of the best Volvo dealerships in the country and the only one in Texas.”

“This elite group of Volvo retailers have excelled in the arena of new and used vehicle sales, parts sales and customer satisfaction,” says John Maloney, President and CEO of Volvo Cars of North America. “This award serves “to truly recognize the ‘best of the best.'”

To see first hand why Park Place Volvo has earned this award, please come visit us for yourself. We look forward to proving our commitment to excellence during your visit.