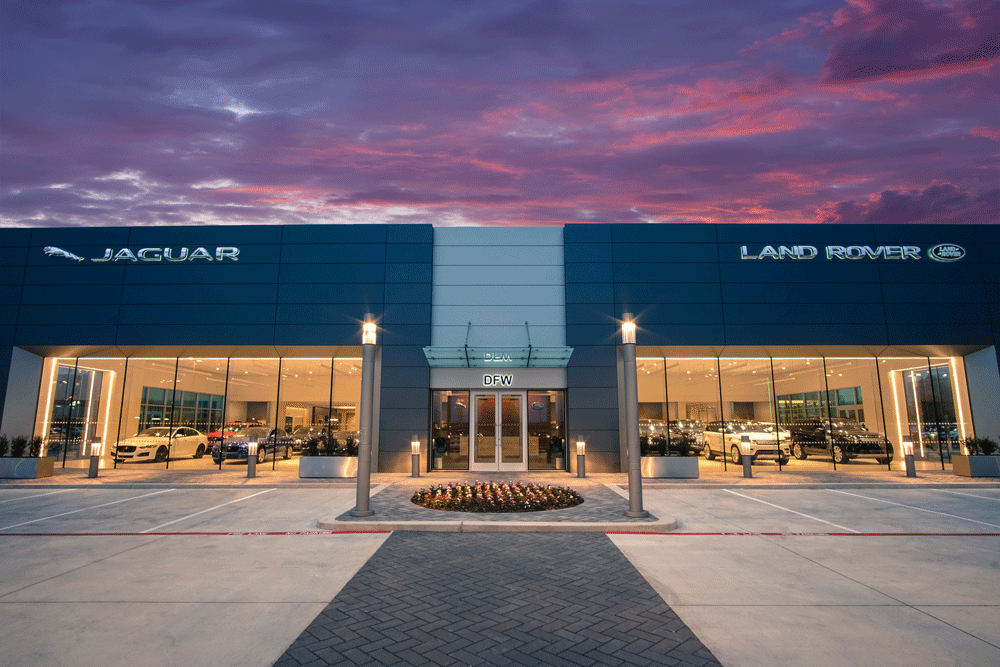 With construction completed and the final design details nearly finished, Park Place Dealerships will open its newest dealership, Jaguar Land Rover DFW, on July 1 in Grapevine. Located on the south side of Highway 114 between Main Street and Texan Trail Parkway, the dealership sits on eight acres and is the third dealership in Northeast Tarrant County for the company.

Park Place has moved its Jaguar dealership from Plano to Grapevine and has added the Land Rover brand to its portfolio.

“Northeast Tarrant County has been growing at a great rate since we opened the Lexus dealership in 2000,” said Ken Schnitzer, chairman of Park Place Dealerships. “We moved our Mercedes-Benz dealership from the Mid-Cities to Grapevine in 2012 and we recently broke ground on a Porsche dealership which we plan to open next year. To say we love doing business in this area may be an understatement.”

Jaguar has a strong following for its vehicles including the XE and F-PACE, the first SUV in the brand’s history. Land Rover is an iconic brand and just introduced the new Ranger Rover Velar at the New York Auto Show which goes on sale later this summer.  Jaguar Land Rover just recorded one of its best sales month in May for the company with Jaguar Land Rover U.S. sales for both brands up 14 percent over May 2016. Year to date, Jaguar Land Rover is up 22 percent in the United States.

“We will be adding jobs as we begin to assess new positions that will be needed to best serve our clients in the Park Place manner,” remarked Jordan Case, President of Park Place Dealerships.  “We are always looking for people who enjoy taking care of others and working in an environment where they are valued.”

The Park Place brand has become synonymous with offering clients a high-quality ownership experience. The company continues to be recognized locally and nationally with top honors for its customer service, sales, and excellent processes.

Park Place Jaguar Plano was named a recipient of the 2016 Pride of Jaguar Retailer Excellence five years in a row. Only 16 of the 162 Jaguar dealers across the United Stated were selected based on being top performers in three core business categories; customer advocacy, sales and business excellence.  Out of the 16, only one Jaguar retailer is awarded the esteemed Marque of Distinction title for being the top retailer for its brand. Jaguar Plano earned the Marque of Distinction as the #1 Jaguar dealership in the country three years in a row.

The origins of Jaguar can be traced back to a company that began by making motorcycle sidecars in 1922.  The Swallow Sidecar Company later started building automobiles and moved to Coventry, switching its name to Jaguar after the Second World War. It produced premium saloons and sports cars, including the legendary XK120.

After Tata Motors, India’s largest automobile manufacturer, acquired Jaguar and Land Rover from Ford in 2008, it merged the two marques into a single company. U.S. sales for Jaguar Land Rover surpassed 105,000 in 2016 which was an annual sales record for the two brands. Land Rover reached a new annual high mark of 73,861 units, an increase of five percent from 2015.