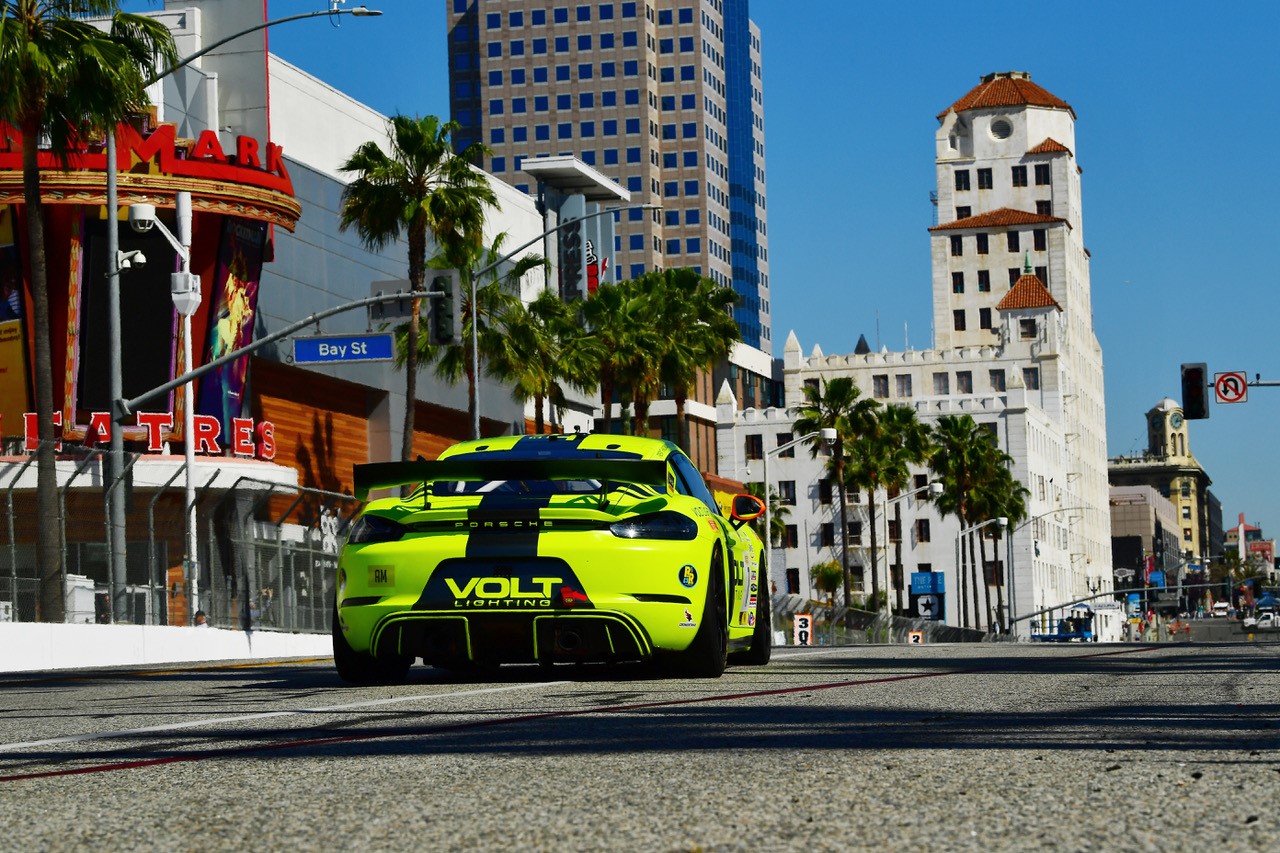 Park Place Motorsports Driver Alan Brynjolfsson capitalized on his clean racing to finish fourth in the Am class of the SRO GT4 America Sprint Powered by Pirelli series at the GT Long Beach Grand Prix ensuring he claims the lead in the Am Drivers points standing.

While race strategy does not tend to vary significantly in sprint races, Brynjolfsson may have had a bit unusual one. Starting fifth in the No. 7 VOLT Lighting Porsche Cayman GT4 Clubsport MR, he patiently awaited the Long Beach streets to claim their first victim. His wait was far from long with the first caution coming out seven minutes into the race with a car and debris covering Turn 9. The first restart gave way to the second and final yellow nearly instantaneously.

From the second restart forward Brynjolfsson used his racecraft to gain traction and the Porsche’s agility to fight against the competition. With 25 minutes remaining Brynjolfsson and the No. 7 Volt Lighting Porsche Cayman advanced as high as third in the Am class. While the front of the field was packed in the tight confines provided by the street course, Brynjolfsson fell back to fifth and battled back to fourth for the finish in the second street course event of his racing career.

“I’m very happy with the way the weekend went,” Brynjolfsson went. “Number one walking away with a clean car and just having a solid performance weekend all weekend. I’m happy with the team. The race went almost perfect from my standpoint, I just wished I had qualified better. That was the big difference in terms of the race finish. Right now, Mike Johnson told me we’re sitting first in both Sprint Am and GT4 Am drivers’ championship, so that’s more important. Today, we got great points toward the championship. It’s been a great experience having my first street courses, St. Pete and Long Beach, back-to-back and leading championships is excellent.”

Director of Race Operations Mike Johnson had his eyes on the championship before the street courses knowing it was an opportunity to create a point cushion ahead of the competition.

“Right now, I am just happy with how well Alan is driving and how well our team is performing,” Johnson said. “To lead both the GT4 Sprint and Sprint X East Championships in our first season at this point of the year is a real testament to how hard our guys have been working.  Of course, the next race at VIR will really show how organized we are, or are not, as we try to run 4 races in one weekend, but having a win there last year for Alan and Trent in the Mustang gives us some confidence going into the weekend.”