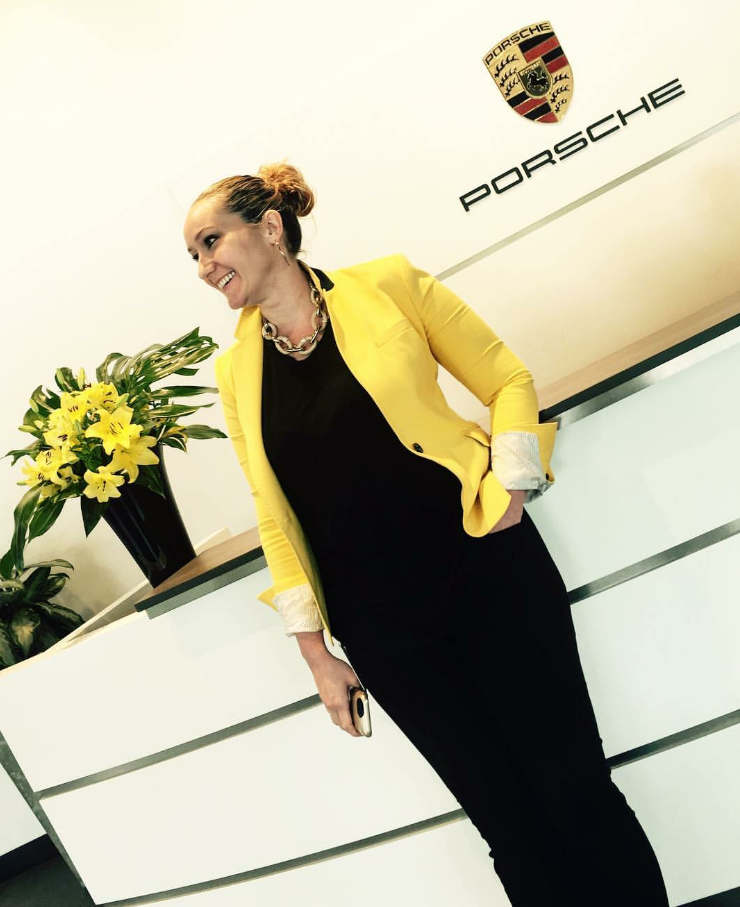 Mindy Collins is a Sales Manager at Park Place Porsche, and is the Park Place High Performance Member for September.

Mindy was born on a military base in South Carolina and journeyed to the mid-west to live where her parents were from- on a farm. She tells us that she frankly hated outside bugs and was constantly running from chickens who would chase her and large pigs that she was convinced were trying to eat her (and her tricycle) all in one bite.  At the age of six, Mindy and her family made the move to Texas and she has yet to look back.  Although she lacks a southern accent, Mindy really feels like Dallas is her home as she’s made a name for herself in a variety of ways, including opening up her own art gallery in at Hotel Palomar in Dallas.

She began her career at Park Place Dealerships at our Plano Lexus location in 1999 in HR. After being HR manager for six years, she decided it was time for a change of pace and pursued a career in sales, where she eventually found her way to Park Place Porsche. Fun Fact: She did take a few years off to open her gallery, but realized she missed the fast paced environment of the luxury car business. She came back and has successfully pursued both passions, using her left and right brain on a consistent basis, allowing her to be both business savvy and creative.

With her passion for Porsche, creative outlets, and commitment to continuous improvement, it is no wonder Park Place Porsche General Manager, Patrick Huston, did not hesitate to nominate Mindy as our September High Performance Member.

What is your dream vehicle (then & now)?   “Then – a fire truck because I only saw fire trucks and tractors on the farm.  Now- a black 2017 Porsche 911 with gold wheels and aero kit on the back. I love that car.”

How did your career in automotive begin? “I started at Park Place Lexus Plano 1999 in HR.  After 6 years as an HR Manager, I wanted to go into sales….so I did. My goal was to be on the Porsche side, and I knew that’s where I would eventually be. It took a while but I believe if I put my mind to something…I will accomplish it.”

If you could go back five years, what advice would you give yourself? “Don’t color your own hair. I did, and I fried my hair this past year. Patience is not one of my virtues and waiting for it to grow out isn’t good for my vanity. So, I do what any woman would do and I toss my hair into a bun, drink some coffee and get things done.”

What is your fondest Memory at Park Place? “Being with Park Place this long, I have a lot of fond memories. In 2001, I wanted to learn how to drive stick shift so I leased a Boxster for four years (and never had to replace the clutch). A few members taught me so I could drive myself to and from work. When I want to do something, I go all in. I may fall, but what if I don’t?”

Why is Park Place, Your Place? “Park Place is my home, and it’s helped make me a better person today as I’m allowed to fall down, make mistakes, and then get right back up with a better understanding to be a better person and to keep running with my team.”

If you are interested in learning more about Park Place Porsche, please don’t hesitate to reach out to Mindy; she will be more than happy to assist.