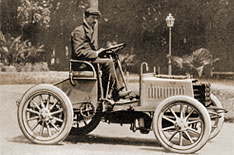 With his youthful character, Ettore Bugatti seemed eccentric to many; but nearly always stood out from his contemporaries with his youthful air, and for dressing in unconventional and expensive suits.  The era of the automobile had just begun and the race was on; businesses starting, growing and engineering and building their first motor vehicles.

Bugatti was creating and perfecting an automobile of exclusive performance and beauty, without formal engineering or technical education, at a very young age considering others designing in the growing automotive world.  Pioneers like Daimler and Maybach were already well into their forties, and formally trained as engineers. Today, we might say that Ettore Bugatti was cutting edge.

Ettore Bugatti followed his dreams with much persistence, and others often evaluated his designs for technical feasibility. The end result, however, was always a perfectly proportioned automobile, both ‘technically feasible’ and aesthetically incomparable.

Bugatti took the greatest invention of the early 20th century, the automobile, and fused with it a distinctive artistry and beauty, luxury, and technical performance.  Certainly, a masterpiece such as a Bugatti automobile, each produced by hand, would require quite an impressive cost to produce.  Ettore Bugatti was never concerned with these economic details, and never opted for the more efficient, cost-effective production methods of the emerging industrial manufacturing. He was more interested in the final product – that it was a perfect coupling of performance and aesthetics.

Bugatti was constantly testing his own technical innovation on the roads and racetracks. He would often adjust the technical specifications or look for a mechanical solution, but often only after one of his cars failed to take first place. Unlike his competitors, Ettore Bugatti was not willing to compromise the overall aesthetics of the Bugatti vehicle (including the engine itself) for some sort of ‘edge’ on speed.

What makes the brand so fascinating and exclusive – is that it’s still here today, and is still the combination of passion, technology, performance and beauty – that it was when it was first conceived by Ettore Bugatti. Because he was never concerned with the cost, and because he never compromised his vision for the end result, he often found his brand in economic difficulty. Still, Ettore Bugatti consistently found ways to keep the dreams alive, and made ends meet with other jobs throughout his career. Bugatti build airplane engines, and also developed and built carriages for the French railway. This large project played a large role in he and his 800 employees surviving the Great Depression and worldwide economic crisis preceding World War II.  The fundamental values of the Bugatti brand – artistry, beauty, performance and technical innovation – are alive today in the sleek designs of the Bugatti automobiles –  as they were 100 years ago.

Bugatti celebrated their one hundredth anniversary in 2011.