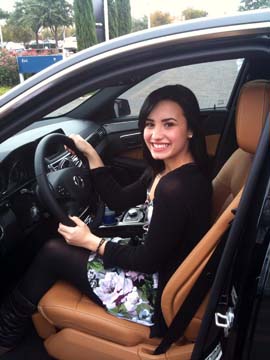 Disney star Demi Lovato turned 17 last August, but she couldn’t really celebrate because she was in Canada filming Camp Rock 2 with the Jonas Brothers. The film recently wrapped and Demi returned home to her family in Colleyville. One of her first stops was to visit her uncle David De La Garza, and to pick up her first car: a new 2010 Mercedes-Benz E350.

At the very top of her list was a trip to the Texas DMV, reports De La Garza, Finance Director at Park Place Motorcars Dallas, She wanted to have a Texas driver’s license rather than a California one. And she would only buy a car from Park Place Motorcars here in Dallas for obvious reasons. David De La Garza’s brother Eddie is Demi’s stepfather and manager. Demi’s mom Dianna is a former Dallas Cowboys Cheerleader and singer. Demi’s younger sister Madison De La Garza plays Juanita Solis (Eva Longoria’s daughter) on ABC-TV’s Desperate Housewives. Her oldest sister Dallas Lovato is an actress and singer as well. Demi got her start on the locally produced Barney & Friends TV show. She ordered the 2010 E350 back in July, said De La Garza. The car is as loaded as you can get a car. It has absolutely everything: a high-end sound system, iPod kit, Parktronic, etc. Best known as Mitchie Torres in the Disney Channel Original Movie Camp Rock, and Sonny Munroe in the Disney Channel’s TV series Sonny With A Chance, Lovato is also a solo music artist. Her first album Don’t Forget debuted at #2 on the Billboard 200 in September 2008. Lovato released her second album, Here We Go Again, last July. The album debuted at #1 on the Billboard 200, selling over 108,000 copies in the first week. I have a firm commitment from my brother that all their luxury car purchases will be through Park Place, says David De La Garza with a smile. He knows there will be family trouble if they don’t.