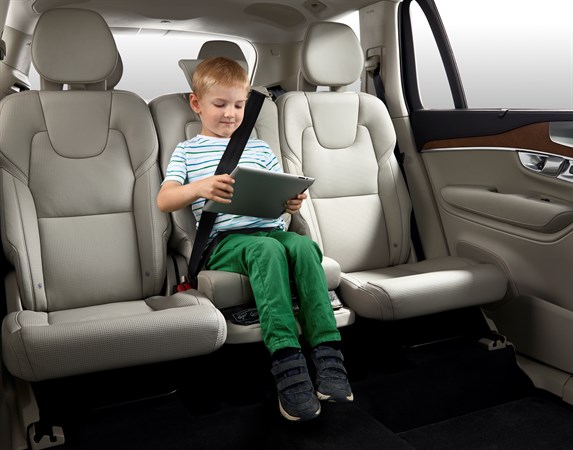 Volvo is making things a little easier for parents with young children, with the all-new Volvo XC90. The XC90’s all-new interior is the most luxurious, with emphasis placed on the driver and passenger’s needs.

Since the new XC90 will be popular with families, attention was focused on passenger comfort, including those riding in the second and third rows, clever use of space, versatility and ease of use.

An integrated child booster seat is an option for the second-row center position. Since the seat slides, it can be positioned conveniently closer to the front seats for better access to the driver and front passenger. The seat is designed for children weighing from 33 to 79 lbs. (15 to 36 kg).

Back in 1978 Volvo Cars developed the very first cushion for children in cars. In 1990 the Swedish car maker took child safety to a new dimension with the development of the first integrated booster seat, an ingenious fold down and out version in the rear centre position.

“The introduction of the first integrated booster cushion for improved child safety in 1990 was a huge step forward for child safety. One of the key benefits of integrated booster cushions is that it is developed as a part of the seat and the safety belt is in more direct contact with the child’s body, removing the possibility of ‘slack’ in the belt that could be associated with accessory booster cushions/seats or child seats,” said Lotta Jakobsson, Senior Technical Leader at Volvo Cars Safety Centre.

Double pop-up integrated booster seats in the outer rear seats were introduced in the Volvo S40 in 1995.

See for yourself what luxuries the all-new Volvo XC90 has to offer, when you stop by Park Place Volvo in Dallas.