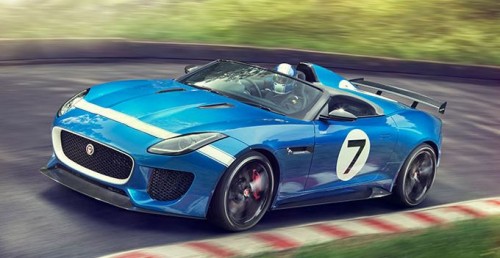 What would a race spec F-Type look like? Jaguar is answering that with the new Project 7 concept car. The name comes from the brand’s 7 Le Mans wins between 1951 and 1990, and its design shares cues from the cars that delivered those victories.

With Jaguar banking on their racing heritage, it makes sense that the concept debuted at the Goodwood Festival of Speed. The event itself was created to celebrate Britain’s racing history, bringing classic race cars to the estate housing the Goodwood Circuit and hill climb courses.

Design
The overall look is somewhere between the current F-Type and the D-Type, a car that dominated Le Mans in the mid-50s.

The lightweight aluminum body gets a ring of carbon fiber aerodynamic enhancements running along the bottom edge. The tall rear diffuser is aided by a low fixed spoiler.

There’s still a full cabin, but the passenger’s seat has been replaced by a holder for a helmet and the windscreen has been shortened. The fabric top has also been jettisoned: in its place, a fairing with a built-in roll cage extends behind the driver’s head for better aerodynamics.

French racing blue was chosen instead of the expected British racing green; this color was the one most often used on the D-Type.

Performance
While it may be a concept, this is a fully-functional car. A retuned version of the supercharged V8 together with a freer-flowing ceramic-finished exhaust bring power output up to 550 hp and 502 lb-ft. of torque, which is 54 hp and 41 lb-ft. more than the production car. The suspension has been reworked, lowering the ride height by 10 mm and improving cornering ability.

Thanks to the lighter body, aerodynamic tweaks and more powerful engine, it can go from 0-100 kph (0-62 mph) in 4.2 seconds with an electronically limited top speed of 186 mph.

Will it be built?
A race spec car seems like a no-brainer with Jaguar’s return to sports cars, and most of the Project 7’s are practical for mass production. Whether or not features like the headrest fairing make it to production will depend on how well they mix with current homologation requirements.

You can drive part of Jaguar history. Visit your Park Place Jaguar dealership in DFW today to see the full line.