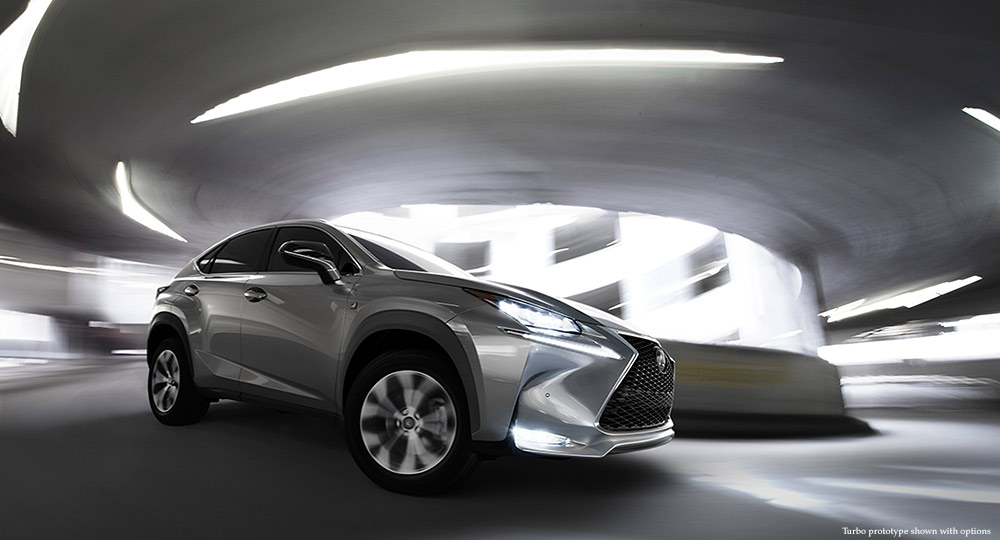 Lexus’ first luxury compact crossover, the NX, made its world premiere at the 2014 Beijing International Automotive Exhibition, which runs through April 29. The NX, created for urban and active lifestyles, features an edgy, emotional design that is distinctively Lexus. Sales of the NX are scheduled to begin in world markets in the second half of 2014.

Two powertrain variants of the NX are on display in Beijing: the NX 300h, a highly efficient hybrid, and the NX 200t, the first Lexus fitted with a turbo engine.

The Lexus-developed direct-injection turbo engine features the world-first combination of a cylinder head with an integrated water-cooled exhaust manifold and a twin scroll turbo charger. This combination in addition to other new technologies such as a turbo-specific D-4ST fuel injection technology and continuous variable valve timing with expanded valve opening angles (VVT-iW) realizes both an excellent ride and environmental performance.

The 2.0-liter NX is the first Lexus to be fitted with an idling-stop system, which reduces fuel consumption by automatically switching off the engine when the vehicle is idling. The system used in the NX has extremely fast engine-restart time.

To ensure Lexus quality and performance, the new turbo engine has been tested for more than 1 million kilometers.

The NX employs specialized Lexus manufacturing techniques such as body adhesives and laser-screw welding to improve the rigidity of the suspension system as well as the body, enhancing overall driving performance.

All-wheel drive turbo models feature a Dynamic Torque Control All-Wheel Drive system which automatically switches from front-wheel drive to all-wheel drive by calculating the driver’s intended driving line and adjusting the distribution of torque to the rear wheels as required. This increases cornering performance on all surfaces. All-wheel drive hybrid models also benefit from improved cornering, particularly on slippery surfaces, due to the E-Four system.

The “F SPORT” grade boasts numerous exclusive features such as specially-tuned suspension and interior and exterior design. In addition, the F SPORT variant achieves even sharper handling due to performance dampers that improve rigidity while absorbing small amounts of flex.

The Panoramic View Monitor, introduced into a Lexus vehicle for the first time, helps the driver avoid other vehicles and pedestrians approaching from the sides. This system combines video from four cameras mounted to the front and rear sides of the vehicle, offering a view of everything happening around the car, including in blind spots. The display is automatically adjusted based on gear-stick operation, with the system able to display enlarged views from above the vehicle.

Radar Cruise Control with All-speed Tracking Function maintains inter-vehicle distance within a set speed and supports the driver by detecting the vehicle ahead and ensuring that an appropriate distance is maintained from cruising speeds down to a stop.