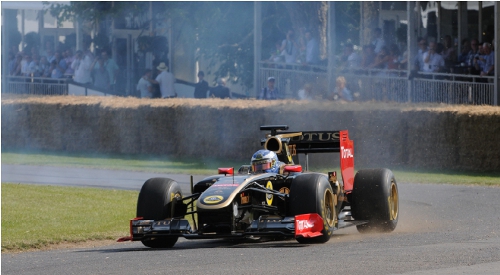 The peace and tranquillity of Lord March’s estate will be shattered from 29th June to 1st July as Lotus takes centre stage at the 2012 Goodwood Festival of Speed, which celebrates Lotus innovation, engineering, heritage and style.

And to bring the track action bang up to date, Lotus will be blasting its most recent jaw-dropping models up the hill, like the Exige R-GT rally car, making its UK debut, the Lotus T125 and the car that has motoring magazines all over the world hailing Lotus’ wizardry – the tyre-squealing Exige S.

We’ll also fire up our brand new Grand-Am car, the Evora GX racer. Like the GTC, it’s the Evora on a diet, fitted with more rubber and flared wheel arches. Weighing in at just 1,150kg and mated to a 440bhp V6, it’s been fettled to meet the American series’ spec with some aero changes to the front, a stock Grand-Am rear wing, and the removal of ABS and traction control, putting driver skill paramount and the promise of some spectacular tyre smoking.

Away from the track, Bonhams is holding an auction of Lotus road and racing cars – 24 models stretching all the Lotus eras; from a Le Mans veteran Team Lotus Type 11 and ex-Formula One Type 18 to a selection of mint road cars and three unique concept cars.

These and other two-seat toys of the 21st century might not exist were it not for the little Lotus Elan, which blows the candles out on its 50th birthday cake this year. Surprising, considering how gorgeous it still looks! Lotus pays homage to this revolutionary sports car on its 1000 m2 stand taking pride of place along side the current Lotus line up.

Also on the Lotus stand, Lotus Engineering will show a number of technologies that can improve both performance and efficiency for cars of the future. Leading the Lotus Engineering display is the Lotus Evora 414E Range Extender Electric Vehicle, complete with HALOsonic active noise control and a virtual seven speed gearbox. This technology demonstrator produces 414 PS and an incredible 1000 Nm of torque from the two electric motors that drive the rear wheels. These amazing figures help slingshot the Evora 414E to 60 mph in around four seconds. Back at the Lotus Headquarters in Norfolk, an Evora 414E is now undergoing test work and the development team is delighted with the progress that has been made already.

Lotus Engineering will also show its SABRE engine which demonstrates “powertrain downsizing” where the torque and power of this 1.5 litre, 3 cylinder engine is the equivalent to a 2.2, 4 cylinder but with the fuel efficiency and economy benefits of the smaller engine.

Being Goodwood’s featured marque, though, means more than a car club turnout and an opportunity to show new models. The spirit of Lotus will be felt all around and none more so than when gazing up at this year’s sculptural centrepiece. Created by Lotus, Lord March and acclaimed artist and designer Gerry Judah, it represents Lotus’ infinite commitment to sporting success and driving pleasure. We don’t want to give too much away except to say – it’s massive!

Lotus and Goodwood’s shared philosophies of speed, emotion, competition and having a roaringly good time, are all here. Come and join us in toasting the past, present and future of the best of British!

Aslam Farikullah, Chief Operational Officer Group Lotus, “Goodwood has become the most important car culture event in the world, and the similarities between what the Festival of Speed is trying to do and what we would like to communicate are clear. It’s about showcasing the past, present and future of sports cars and motor racing. We’ll be in Goodwood to show what we’ve done over the last year, as well as the last 60 years. Heritage is absolutely everything. If you don’t understand your past, you can’t realise your future. We remember not only the good times, but the bad times too, it’s what makes us stronger and gives us depth of character. Lotus has been pioneering both on the road and on the track for six decades. At Goodwood we’ll be able to showcase everything the company has done, and we will use this as a foundation for the future.”

Clive Chapman, son of Lotus founder Colin Chapman and Managing Director of Classic Team Lotus, “There will be a mixture of old and new cars at Goodwood, and this is what Lotus is about; looking to the future, but remembering the past. Lotus has such a rich history, there’s much to be proud of, and this year marks the 60th anniversary of Lotus Engineering. We like to invite our customers to drive as a thank you for their support, but then, normally, there are one or two famous drivers that Goodwood has invited. Lord March likes to see the cars reunited with their original drivers. It’s therefore likely we’ll see Emerson Fittipaldi and Jacky Ickx reacquainting themselves with the beautiful black-and-gold 72E. As for most of the historic owners, they’re living out their boyhood dreams by working the pedals of these heroic cars and getting to rub shoulders with Lotus legends.”

Gerry Judah, artist and designer, “This year’s sculpture is a lightweight steel monocoque construction. I think its form shows the Lotus psychology and culture. I’ve always admired Lotus since I was a boy. They’re such British cars, with that ideology of clever, forward thinking science and engineering. That was something I knew I needed to embrace. It’s almost unconscious how I approach sculpture. I don’t do brands. None of the sculptures I’ve done for Goodwood have spoken about the brand, you can get an advertising agency to do that. I do something more intuitive. It is, dare I say it, a spiritual journey in design.”

The Earl of March, Goodwood owner and organizer, “Lotus is without a doubt one of the greatest, most evocative motoring and motor racing brands Britain has produced and we are very happy that the company will be celebrated this year. For the first time, we will gather all the cars from the featured marque and they will be paraded in front of the house, around the Lotus sculpture, and then each will be raced up the hill. Lotus’ beautiful, innovative, joyful cars and some of the heroes that made them famous will be out in force, not sitting silently but driven hard for the purpose they were born. It’s going to be a wonderful automotive celebration.”