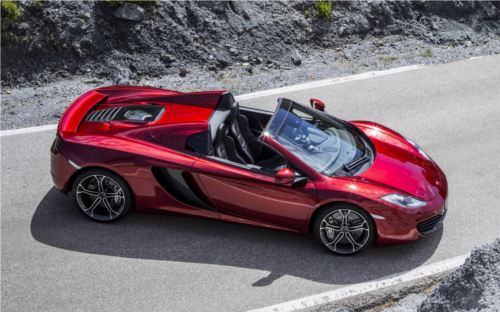 The stunning new McLaren 12C Spider may now be seen in action for the first time, with the launch of short film at McLaren Automotive’s official YouTube channel.

Shot using cinema-quality RED camera technology, the film begins with a Volcano Red 12C Spider in high-speed action on track, before it traverses the winding mountain roads of Andalucía in Southern Spain. The film showcases the 12C Spider’s spectacular combination of performance and usability.

Antony Sheriff, McLaren Automotive Managing Director said: “We know 12C drivers love the Formula 1 technology DNA that runs throughout their cars.  With the 12C Spider, owners will have an even greater opportunity to create their perfect driving experience. Top up or top down, the sports car with highest performance among the competition just became even more breathtaking. The exhilarating aspects of driving the 12C Spider are captured beautifully in this great new film.”

Prospective customers and sports car enthusiasts may now specify their desired 12C Spider at McLaren Automotive’s interactive online configurator, which is located at: www.configure.mclaren.com. There, the 12C Spider may be personalized with myriad exterior and interior finishes, a range of wheel designs and carbon fiber appliqué.

If you have questions about the new McLaren 12C Spider, please reach out to our McLaren Dallas Specialists: