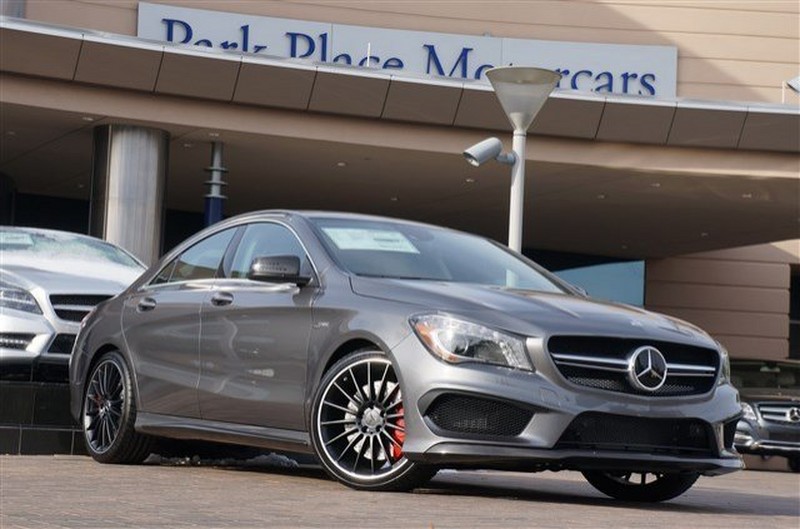 Park Place has three Mercedes-Benz dealerships in the Dallas Fort Worth area where you can receive a personal consultation and even take a test drive. Please contact any one of these dealerships to learn more.
Below please find a summary by model of what’s new for the 2014 model year.
2014 Mercedes-Benz CLA-Class
In January of 2013 the all-new CLA-Class made a sneak-peek debut for U.S. and international press at the Mercedes-Benz ‘New Years Reception’ in Detroit. Arriving in dealerships this fall, the 2014 Mercedes-Benz CLA-Class features a 4-door coupe design, aggressive styling, and a brand new engine mated to a 7-speed dual clutch transmission. The CLA-Class will be a critical component to expanding the scope of our brand and growing our collective business in 2013 and beyond.
Highlights of this all new model include:

2014 Mercedes-Benz CL-Class
The 2014 model year marks the final year of production for the C216 CL-Class. The next generation CL (C217) will launch with in the 2015 model year.
– The Premium 2 Package is standard on the CL550 4MATIC and CL63 AMG® (includes rearview camera, active multi-contour front seats with massage function and Night View Assist PLUS)
– The code for the Driver Assistance Package has been changed to 997 (formerly 266).
– The P61 – Grand Edition Package is no longer available for the 2014 model year.

Highlights of the 2014 CLS-Class include:

One of the most exciting elements of the redesign is the debut of the Mercedes-Benz Intelligent Drive Technologies featuring industry firsts such as:

Nothing exemplifies our commitment to our mainstay model range more than the redesign for Model Year 2014. With the many upgrades for 2014, the E-Class is poised to maintain its position on the forefront of design, quality, and technology.

2014 Mercedes-Benz GLK-Class
The 2014 Mercedes-Benz GLK-Class receives a few enhanced offerings to its successful character and design including:
– Introduction of heated steering wheel as a stand-alone option
– Chrome Tailgate Strip has been added to the AMG Styling and Appearance Packages
– Dolomite Brown Metallic replaces Cuprite Brown Metallic
– Parking Assistance Package has been added as a Special Order (SPC)
– Driver Assistance Package has been moved to Special Order (SPC)

2014 Mercedes-Benz SL-Class
As the SL-Class was completely redesigned in MY13, there are limited changes for the second year of its lifecycle in MY14 including:
– Cardinal Red Metallic replaces Pearl Beige Metallic
– Addition of Polar White
– Analog dash top clock (code 246) is now standard on the SL550
– The code for the Driver Assistance Package has been changed to 997 (formerly 266)

2014 Mercedes-Benz AMG®
The E63 AMG® features a significant redesign, increased power, and the addition of standard 4MATIC® for all models. Beneath the new sheet metal, the M157 5.5-liter Biturbo receives a power increase to 550hp & 531 lb/ft of torque and delivers 0-60 mph in a staggering 3.6 seconds.
For those customers looking for even more power, the new E63 S-Model 4MATIC® (replacing Performance Package) is available in both sedan and wagon (offered as S Model only). The E63 AMG S-Model boasts 577hp & 590 lb/ft of torque, accelerating from 0 to 60mph in an estimated 3.5 seconds. This new staggering level of performance makes the E63 S-Model quicker from than every car currently offered by Audi, BMW and Lexus! Additionally, the MY14 CLS63 AMG now features 4MATIC as standard and the addition of the 577hp S Model 4MATIC® to the lineup.
The C63 for 2014 lineup now includes the Edition 507 coupe and sedan (replacing the P31 Development Package). The Edition 507 produces a mighty 507hp and 450 lb/ft of torque for 0-60 performance in just 4.1 seconds. Additionally, the Edition 507 debuts two new interior designs,