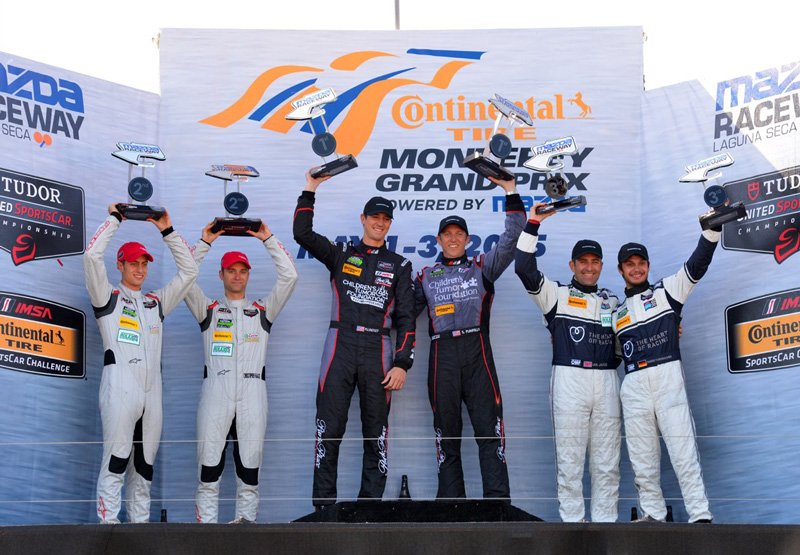 Drivers Patrick Lindsey and Spencer Pumpelly led the team to victory after a difficult start to the season.

“It is great to get the monkey off our back,” said Team Principal and co-driver Patrick Lindsey. “We’ve had really fast cars, qualified well, and bad luck has kept us from the top of the box. This is just the first win to get out of the way, there are a lot more to come.”

Good luck and careful management of resources contributed to a dominant performance. They weren’t off to the best start at the Sunday race, a slight balk on the start allowed a few competitors to get ahead during the opening laps.

As the race went on, momentum shifted as the competitors started pulling over for pit stops.

Team Park Place Motorcars knew the challenges ahead with the twists and turns of the Mazda Raceway Laguna Seca. Californian Patrick Lindsey had a strategy in place: patience and managing his tires and fuel would be key to winning.

Patrick was able to pit from the lead with just over one hour remaining, handing the reigns to teammate Spencer Pumpelly for the rest of the event.

“The start was pretty bad for us,” said Lindsey. “If it weren’t for the guys on the pit box though, and our crew over the wall that executed just awesome pit stops, I would have been in a world of hurt.  They gave me the chance to shoot out front, get a little bit of a lead and control from ahead.  And Spencer got in the car and did what Spencer does best which is go out, run hard and win races.”

With Pumpelly comfortably in the lead, all attention turned to managing fuel for the rest of the race. The team’s calculations worked perfectly putting them first at the finish line and taking the first TUDOR win for the team in the process.

“This was a team effort from start to finish,” stated Pumpelly. “The car was fantastic all weekend. Everyone did a great job. Patrick drove really well this weekend and got his first pole. We proved we had a fast car, all we needed was good drives, good pit work and a little bit of luck that we haven’t had. Sure enough, Patrick gave me a huge lead. The guys got us on and off pit road, twice, faster than I’ve ever seen them do it. Just flawless. True team effort today!”

Up next for the team is the highly challenging Grand Prix of Detroit at the beautiful Belle Isle circuit on May 30th. We wish the team all the best as they prepare for the race. Be safe and Good Luck!