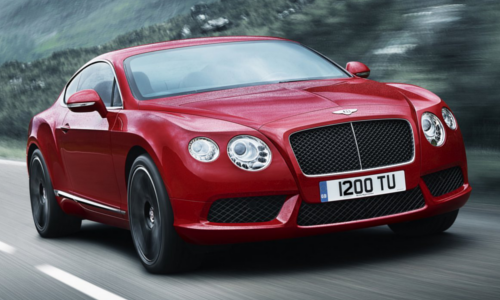 Bentley has a new large, luxurious coupe for the 2013 model year in the Continental GT V8, a car both lighter and more efficient than the V12 model that was the standard Continental through the 2012 model year. Although the brand-new direct-injection, twin-turbocharged V8 sheds a full 2 liters of displacement over the V12, power output and acceleration performance are at similar levels.

As is the custom with Bentley, the Continental GT V8 still comes with world-class luxury and convenience features despite its new lower price point. Pricing starts at around $200,000.

When the Bentley Continental line debuted, a V12 engine came standard, providing smooth, effortless power but at the expense of price and gas mileage. For the 2013 model year, Bentley adds a brand-new engine choice to the Continental lineup: a 4.0-liter twin-turbocharged V8 with cylinder deactivation technology. This motor outputs an even 500 horsepower at 6,000 rpm and 487 foot-pounds of torque at just 1,700 rpm, outstanding figures for an engine at this displacement. Mated to a ZF-designed eight-speed automatic transmission and full-time AWD, the Continental GT V8 is, in many respects, a stronger performer than the V12 base model, thanks to its rev-happy engine and lower curb weight.

Zero to 60 mph comes in just 4.8 seconds, while top speed rings in at 188 mph. Bentley pulled no punches in designing this engine, and it shows as the car pulls hard throughout the rpm range. The eight-speed is perfectly suited to this engine, as shifts are snappy and right on the money when the driver chooses to row the gears himself, while the car has a luxurious, laid-back demeanor when left in fully automatic shift mode.

As the Continental has gained refinement and cut engine displacement, so too has weight been trimmed down by a significant margin. The 2013 GT V8 weighs in at 5,060 pounds with standard equipment, a loss of more than 60 pounds over the V12 model. With less weight comes a lower center of gravity, and better performance when the roads get twisty. Fuel efficiency is drastically improved, now ringing in at 15 city, 24 highway and 18 combined mpg on the EPA cycle, an improvement of 3 combined mpg over the 2013 Continental GT V12. This helps the car avoid that pesky gas guzzler tax, shaving thousands from the true cost of purchase.

Seating four passengers in a large, spacious grand touring coupe body style, the GT V8 comes with a full complement of cutting-edge interior technology. Leather, Dark Fiddleback Eucalyptus wood trim and knurled metal give the car cabin styling that can be tailored to a near-infinite degree to suit individual owner tastes. Leather seating surfaces come standard, of course, available in Beluga, Newmarket Tan, Porpoise or Imperial Blue in a unique design that extends to nearly every visible interior surface. The total cabin impression is one of coddling luxury, with rear legroom approaching that of larger Bentley models like the flagship Mulsanne sedan.

Drivers will be treated to the brand’s latest in navigation and infotainment technology, including a touchscreen in-car control system with a 30-gigabyte hard drive preloaded with complete United States and limited international maps. The hard drive features usable space for MP3 files, which can be played through the eight-speaker surround sound system featuring eight channels of audio. Among luxury coupes, the Continental line has an overall impression of craftsmanship that no other vehicle can match at any price point. From hand-stitched Bentley logos adorning the seats, to the available rear-seat mobile office setup, the Continental GT V8 is the perfect vehicle with which to tackle some back roads, or be driven while enjoying ample space and comfort.