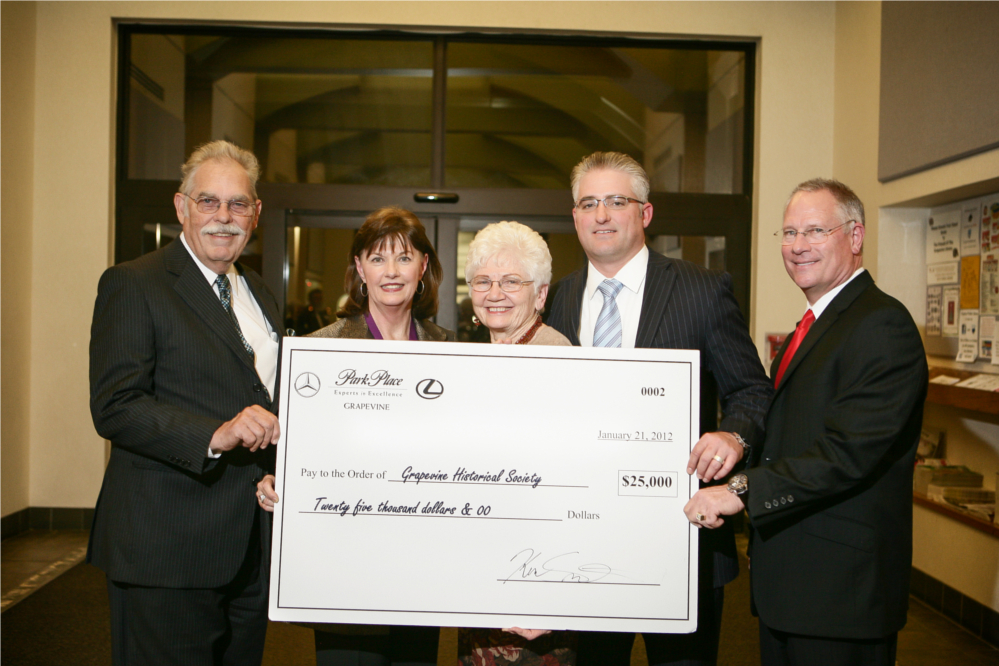 In 1972, the Grapevine Historical Society was born out of an effort to save the historic 1888 Cotton Belt Railroad Depot. One year later, the museum was dedicated by Mayor Bill Tate and for the past 40 years the Historical Museum has welcomed visitors from all over the world.  A new chapter will be written as the Grapevine Historical Museum is a little closer to moving into its new building at 206 West Hudgins later this year thanks to a $25,000 donation from Park Place Lexus and Park Place Motorcars.

“We are so excited to have such generous support from Park Place,” said Margaret Harper, fundraising committee co-chair for the Grapevine Historical Society. “Through this and other corporate giving, we will be able to meet our goal of moving into our new facility by the end of the year. The museum is a fabulous venue that chronicles Grapevine’s rich history.”

The Grapevine Historical Society will move its collection into a new facility located at 206 West Hudgins, with the façade of the 1970s Grapevine Ice Company.  This will increase the museum’s space from 900 square feet to approximately 3,000 square feet.  The new facility will allow the Museum to expand and enhance its current displays and provide space for temporary exhibits.

The new Museum will feature:

“We have been a part of the Grapevine community since 2000 when we opened the first of two dealerships in the city,” said Ken Schnitzer, chairman of Park Place Dealerships. “There is a great history in Grapevine and we are pleased to be a part of preserving it through this donation for the new building.”