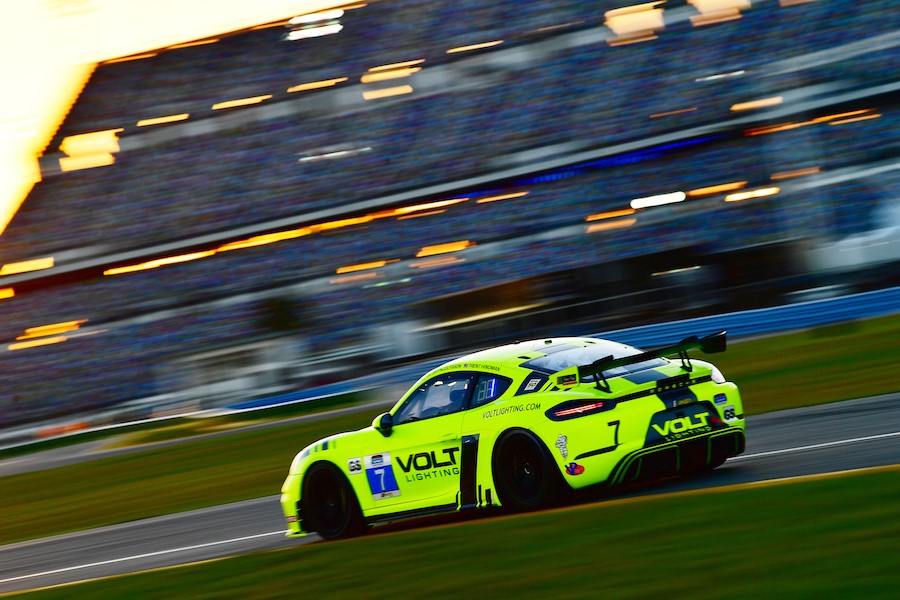 The Michelin Pilot Challenge began the year with both action and drama. In 20 minutes, Driver and sponsor Alan Brynjolfsson with codriver Trent Hindman negotiated a seventh-place finish charging to the front of the field from the 19th position. The Porsche Cayman GT4 was running second in the final hour of the race but served a drive through penalty for a premature restart. The team initially debated the penalty with race control as no position was gained after following the overall leader at the green flag.

Hindman began the race from fifth after qualifying sixth due to a competing McLaren receiving a penalty after tech inspection. At the start he made his way from fifth to third easily. Hindman spent his first stint trading paint within the GS class and maintained position within the top five of the field. Hindman took over for Brynjolfsson to finish the race advancing to podium position prior to the penalty all while avoiding crash damage from incidents happening around him.

“The Volt Racing Park Place Motorsports guys did a great job preparing this brand-new 718 Porsche GT4,” Hindman said. “It was fast straight from the Roar, we were fast all weekend. There were some cars that flew under the radar, but we played that game as honestly as we could. We knew he had good performance going into this race and we really started taking advantage of that with two hours.

“The race was playing out like a typical Mike Johnson strategy, but ultimately a call was made that I jumped the restart and I had to do a drive through. Of course, I’m going to disagree with it, but it is what it is. I’ll have to go back and re-watch it to see where exactly I went wrong, but I was still happy to walk away with minor scrapes on the car. It was wild out there from the drop of the green and it just got more intense as time went on. For us to walk away with a car in one piece, a car that’s strong for Sebring and a car that finished seventh I think it really shows what type of a quality operation this is. I think we’re in a good position to fight for a championship this year.”

“The car was great,” Brynjolfsson said. “We had no problems or attrition out there mechanically or with our competitors. We finished as the number one Porsche so I’m not sure there’s more we could ask for there. Trent had the car in second place before the penalty, which we’re still unclear on. Even with the drive through we were able to finish seventh. This is my third year in a GT4, and this is the most fun and consistent car I’ve driven yet so I’m really looking forward to the rest of the season.”

To Brynjolfssons’s word Park Place Motorsports finishes Race One of the Michelin Pilot Challenge as the highest finishing Porsche. Relive the action from the Endurance Challenge At Daytona Wednesday, Feb. 6 on NBCSN. The series returns for Round Two at Sebring International Raceway March 13-16 for the Alan Jay Automotive Network 120 at Sebring. For a detailed schedule visit http://imsa.com.