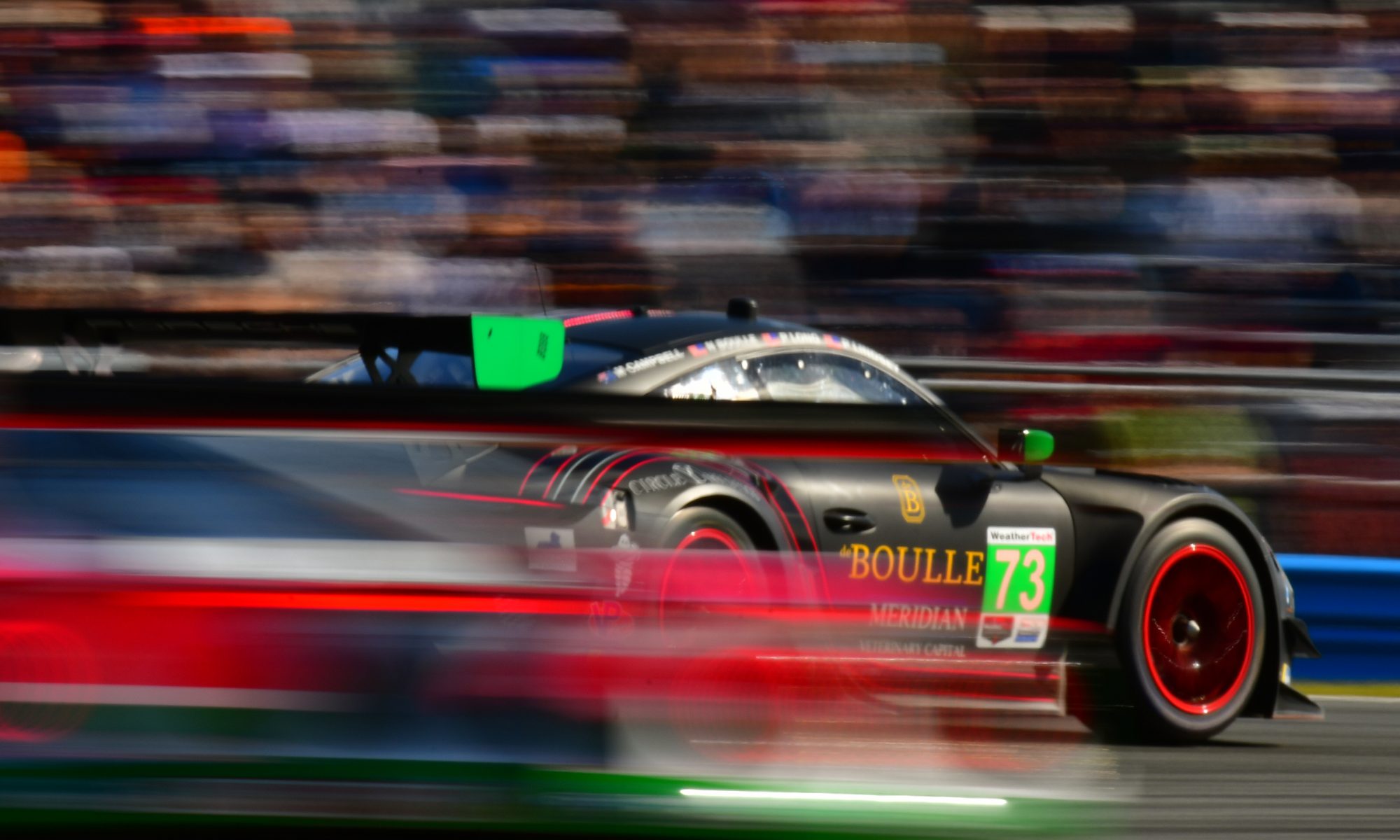 DAYTONA BEACH, Fla. (Jan. 27, 2019) – Park Place Motorsports survived error and flood to finish eighth at the Rolex 24 At Daytona giving the team its highest finish in the twice-around-the-clock classic.

Park Place Motorsports overcame a flooded Daytona International Raceway after gaining back three laps lost to a runaway left rear tire. The No. 73 de Boulle Porsche 911 GT3 R led its way around the 3.56-mile track as the race neared its final two hours. In those hours Park Place Motorsports pitted in hopes to come out ahead and with the proper fuel to go the distance and for the win. However, before the pit sequence began a red flag was thrown due to inclement conditions on track. The 57th running of the Rolex 24 At Daytona finished under red.

Porsche Factory Driver Patrick Long and Porsche Young Professional Matt Campbell spent the majority of their time in the car searching for any sign of grip on the track in the final hours of the race. A combination of oil and water sent multiple competitors off track, into walls and each other. Long nearly escaped a multicar pileup, maneuvering the No. 73 through turns 10 and 11. Campbell steered clear of any on-track drama and made his way to the front of the field, leading until a pit stop and the final red flag shuffled him to eighth.

Endurance driver Nick Boulle and Team Principal Patrick Lindsey handled a majority of the driving Saturday and Saturday night. The race compiled 18 full-course cautions In total, nine of which Lindsey and Boulle endured over the course of their stint. Both drivers kept the No. 73 de Boulle Porsche clean and turning consistent lap times while fighting to earn laps back.

The No. 73 had been running in the lead after nightfall when Campbell lost a tire. He nursed the car back to pitlane where the crew quickly solved the issue and sent Campbell back out. He resumed the race three laps down. Lindsey and Boulle benefited from pass arounds during the many cautions featured throughout their runs. Steady laps by each driver as well as strategy from pit lane aided in Park Place Motorsports returning to the lead lap and then to the lead of the GT Daytona class.

“This race is all about timing and being in the right place at the right time,” Campbell said. “Some things didn’t go our way like the pit stop and the wheel problem, but we were able to make it back. We had really great car speed which really showed at the end of the race in the wet conditions.

“It was really unfortunate that we ended under red and weren’t able to push for a win but at the end of the day we still were able to finish the race and gain points for the team. Everything went well, we didn’t damage the car and stayed on track but it’s rough to think about what could have been.”

“Timing is everything in motorsport and today it didn’t fall our way,” Long said. “The team executed a perfect race and in the end the stoppage of rain bit us, but we’re not the only ones who feel that way. We need to be happy that we got good points and had a good start to the season. I know from experience that you have to put consistent points on the board at the start of the year. I’m grateful to our partners who are here and cheering us on. We will push on to Sebring with our heads held high.”

“This race is so competitive from the moment you get in for your first stint,” Boulle said. “The first time I got in the car it was immediately a sprint. When I got back in for my second stint, I was faced with class traffic as well as trying to maintain the lead. The car had great pace and the crew did a clean job in the pits. We’ve got a really great foundation to build on moving forward. It obviously is heartbreaking to pit from the lead and lose out on winning the Rolex 24 Hours of Daytona but it’s a big year and we just need to focus forward now. I’m looking forward to the 12 Hours of Sebring and seeing what we can do.”

“We could say what if, but you can’t predict everything so I’m really happy with how today went,” Lindsey said. “This was our best run at Daytona. The team executed really well, we had no penalties. All the drivers held there own out there. Pat, Matt and Nick all did really well. Everyone was on it. We’re entering the next race with good points and in the bigger picture that is what matters. I’m excited to see what this team builds.”