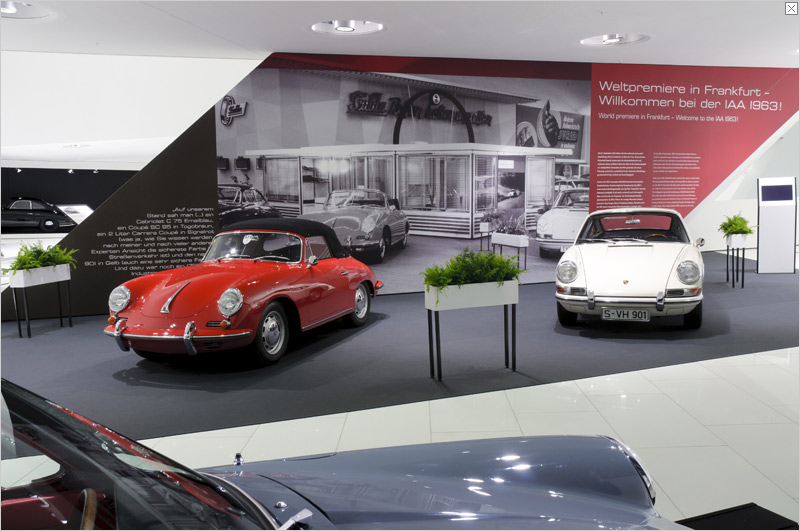 50 years ago, Porsche was looking to introduce a stronger, bigger, and more luxurious version of one of its earliest successful models, the Porsche 356. Conceived by Ferdinand “Butzi” Porsche, with the first sketches drawn out in 1959, the company eventually brought its new design to the 1963 Frankfurt Motor Show. No one present yet knew that the automobile presented at that show – with a non-operational engine, no less! – would become the flagship vehicle of one of the most successful and inspiring car brands in the world. Now, Porsche is celebrating the 50th anniversary of the Porsche 911 high-performance sports car.

Back at its introduction, the 911 was not called that at all: many of the parts in the car’s earliest runs contained the original model still stamped on them, 901. The name change came about when Peugeot claimed to have the rights to all three-digit car names with a zero in the middle. Rather than squabble, the car’s name was modified to the now iconic “nine eleven” and shipped off around the world, bearing a United States price tag of $6,500.

That 1964 model boasted a top speed of 131 miles per hour, thanks to its 128 horsepower, six cylinder, air-cooled engine. For most of its run, the Porsche stunned other manufacturers for the incredible performance it was able to put out with only air cooling.

Ever since, the 911 has been the flagship Porsche model, one of the most successful racing cars ever designed, and the baseline by which all else in its category is compared. No car is as beloved or as revered as the 911, not just for what it is, but what it inspires in the entire high-performance automobile industry. While it is one of the oldest and most venerated nameplates still in continuous production, constant development has kept it at the bleeding edge of performance and style without compromising the basic concept as dreamt up by Ferdinand Porsche so long ago.

Not one to let the heart of the brand go uncelebrated, Porsche has declared 2013 the Year of the 911 and planned a number of activities for the car’s 50th year on the road. The kickoff event was held at the Stuttgart automobile show with a display known as Retro Classics. The Porsche Museum displayed four exhibits featuring four of the most important 911 models to leave the factory. The models on display include the 911 Turbo Coupe, the 1981 911 Cabriolet concept car, the 1997 911 GT1, and a special Type 754 T7, a vehicle which precedes the first 911 but functions as an important milestone in its design

The Porsche Museum continues the festivities on June 4th running through September 29th, when they will feature an exclusive exhibition entitled “50 Years of the Porsche 911.” Attendees will not only be able to explore the storied history of the vehicle, but purchase a special commemorative coffee table book called “911×911” so they can share the experience with others and relive it themselves years down the road.

Finally, a genuine antique, perfectly restored, will tour the world in the form of a 1967 model 911. This beauty of a car will be shown across five continents and in some of the most prestigious locations known to automobiles, including Pebble Beach, Shanghai, Paris, and more. Keep an eye out for the 1967 911 at such events as international fairs and major motor shows.

There is a reason the 911 has been described by Ferdinand Porsche as the only car that is just as much at home on a rugged African safari as it is on the race track at Le Mans or an evening at the Granada Theater. Its timeless style and everyday elegance belies the power that has led it to over twenty thousand race victories since its release. With the 50 year anniversary, Porsche is sparing no expense in celebrating this model that defines not only the Porsche brand, but the entire high-end sports car market.

The entire 2013 Porsche lineup can be seen at Park Place Porsche in Dallas.