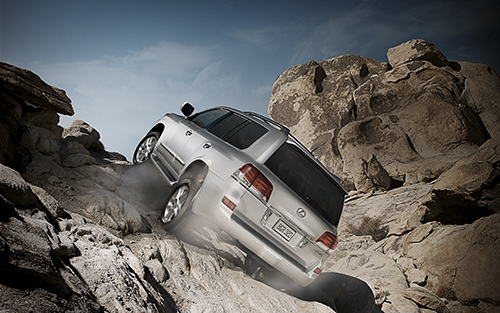 When purchasing a luxury SUV, there are several things that you absolutely must have. First, you require the power and versatility that a capable SUV should offer. The SUV needs enough cargo space to safely and comfortably transport whatever needs transporting, be it a new piece of furniture or a cooler and fishing gear for a quiet day at the lake. The vehicle needs to have plenty of comfortable seating for the family, and it needs to have cutting edge features and equipment to make every time you drive it as safe and as comfortable as possible. The new Lexus LX 570 offers all of this and more, making it one of the best choices available for a new SUV in 2013.

The LX 570 skipped a 2012 model, making the 2013 a substantial step up over its 2011 predecessor. Under the hood the LX 570 packs plenty of power, with a 5.7 liter V-8 engine boasting a solid 383 horsepower. The sturdy frame construction makes it a solid off-road vehicle that can tackle rugged terrain or roughed-up back roads without a wink, including an available suspension with height adjustment capabilities to ensure proper clearance over obstacles (or just make it easier to get in and out of the vehicle!). The 570 is rated to tow up to seven thousand pounds – plenty of power to haul a boat to a secluded mountain lake.

Also included is Lexus’ special Crawl Control feature. Crawl Control can be activated at slow speeds, permitting the driver to ignore the accelerator and brake pedals, instead focusing on navigating difficult terrain. The car itself maintains a slow but steady speed, regulating engine output and brake usage to help prevent slippage. Combined with the adaptive variable suspension and active height control, even the roughest boulder-strewn terrain can be conquered.

Of course, the LX is just as competent on the interstate as off. Strong acceleration and passing power mean an easy, comfortable drive wherever you are.

Space is at anything but a premium. Initially, the 570 comfortably seats eight, with power seating for the second and third rows as well as the first. When storage is needed more than seating, the second and third rows both flip and fold away, creating a huge flat-bed cargo space that can comfortably hold anything that fits in the vehicle. When the load is removed, the seats flip back easily and quickly to accommodate passengers.

As for protecting those passengers, not a single safety feature was spared when outfitting the Lexus LX. A staggering ten airbags are included, as well as active head restraints. When off-road settings are enabled, stability control helps keep everything level. Every model of the LX includes a rearview camera for protection when backing up, with a 180-degree front camera being available to provide extra peace of mind approaching low-height dangers from the front. Safety Connect also comes standard with one year of free emergency connection services just in case.

Helping with safety as well as luxury is the Lexus Enform connectivity system that automatically connects Bluetooth-enabled smartphones to the SUV itself, allowing for hands free phone calls and audio so the driver can keep his or her focus on the road. The system also ties in with mobile phone apps like Pandora and Facebook, among others, allowing them to be operated using either voice commands or the beautiful included LCD touch screen.

The luxury features do not stop there. Four-zone climate control lets every occupant feel comfortable. Satellite radio means plenty of programming for those who opt not to use their own music collection. For those who opt in for XM or use your own music playlist, your tunes can be enjoyed using the surround sound system by Mark Levinson, which boasts nineteen individual speakers. Front seats are both heated and ventilated, the second row of seats is heated along with the steering wheel, and Smart Access keyless entry is supported with a quick push-button engine startup.

Kids will be especially big fans of the dual-screen entertainment system. Both back rows are allowed wireless headphones for enjoyment of whatever is playing. The screen also supports dual-sourcing, meaning two different devices can be plugged into the screen at one time – a DVD players and a game console, for instance.

In the end, the Lexus LX 570 offers exactly what is wanted for a luxury off-road SUV: powerful, rugged off-road capabilities with adjustable variable suspension and Crawl Control, strong interstate and city performance and passing power with features like hill-start assist control, and incomparable luxury in the versatile entertainment system and suite of comfort options. If searching for a luxury SUV for 2013, seek no further than the LX 570.