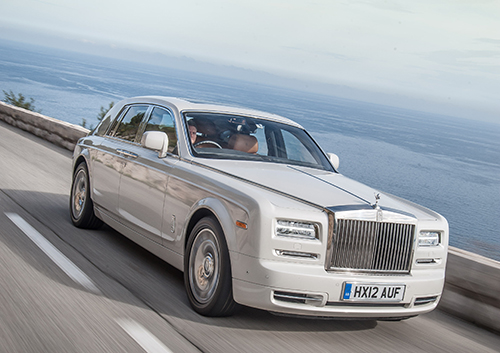 Phantom has always been aptly named. Like a spooky apparition it has disappeared and re-appeared numerous times over the last century. Through it all, the executive flagship has proudly displayed the signature Spirit of Ecstasy hood icon—a reassuring detail for every Rolls-Royce diehard.

As the first Rolls produced by German engineers after a century of British ownership, the Phantom defines the upper-crust marque as influenced by the house of BMW. How have they done?

In short, they’ve done a great job. 2013 marks a decade of extraordinary work on an old-world legend that was designed from the ground up to silence any who would threaten its throne. So far it’s worked.

With rear-wheel drive, a nearly 7-liter V12 engine, and upwards of 450 horsepower, you’d think the deluxe sedan was a sports car, but it’s not. The Phantom is more likely to be found dropping off movie stars on the red carpet. At least that’s what comes to mind when you first open her rear carriage doors. You’ll see the elegant 5-passenger cabin, masterfully lined with hand-sewn leathers and an optional overhead fiber optic “universe” of twinkling stars to complement the experience.

2013: Adjustments to a “Timeless Interpretation”

This year’s car of kings comes with some alterations in style for its Series II incarnation, including lighting changes to the preferred rectangular LED clusters. Adjustments were also made to Phantom’s bumpers and wheels, with expanded paint and polish options for the latter.

There’s no denying it: the Phantom is huge. In light of this fact, Rolls-Royce has made standard the comprehensive camera network that covers the vehicle from five different angles as a navigation aid.

In the interests of improved fuel efficiency, a worthy goal for a V12-powered beast like the Phantom, an eight-speed transmission plus rear differential were incorporated into the car’s drivetrain. The company also dutifully obliged special requests for larger computer screens inside the cabin and an accompanying remote control, which was delivered in chrome.

Phantom, either as sedan, coupe or convertible, already comes with a large number of options, including advanced sound, navigation, and climate systems optimized with the latest technological innovations. The popular Extended Wheelbase (EW) version of the car adds to an already spacious interior and an imposing car length. Customers can order a partition window for passenger privacy as well.

Have an idea for your car that’s not already offered? No problem. Phantom owners can customize their car down to the finest grain under the Bespoke program, which allows requests for custom extras that reflect a driver’s personal automotive style. It’s up to the customer’s imagination.

For many, the prestige of the Phantom will remain a Hollywood dream, but if you’re lucky enough to get your hands on a Phantom, you’ll own one of the most respected and customizable automobiles in the world.