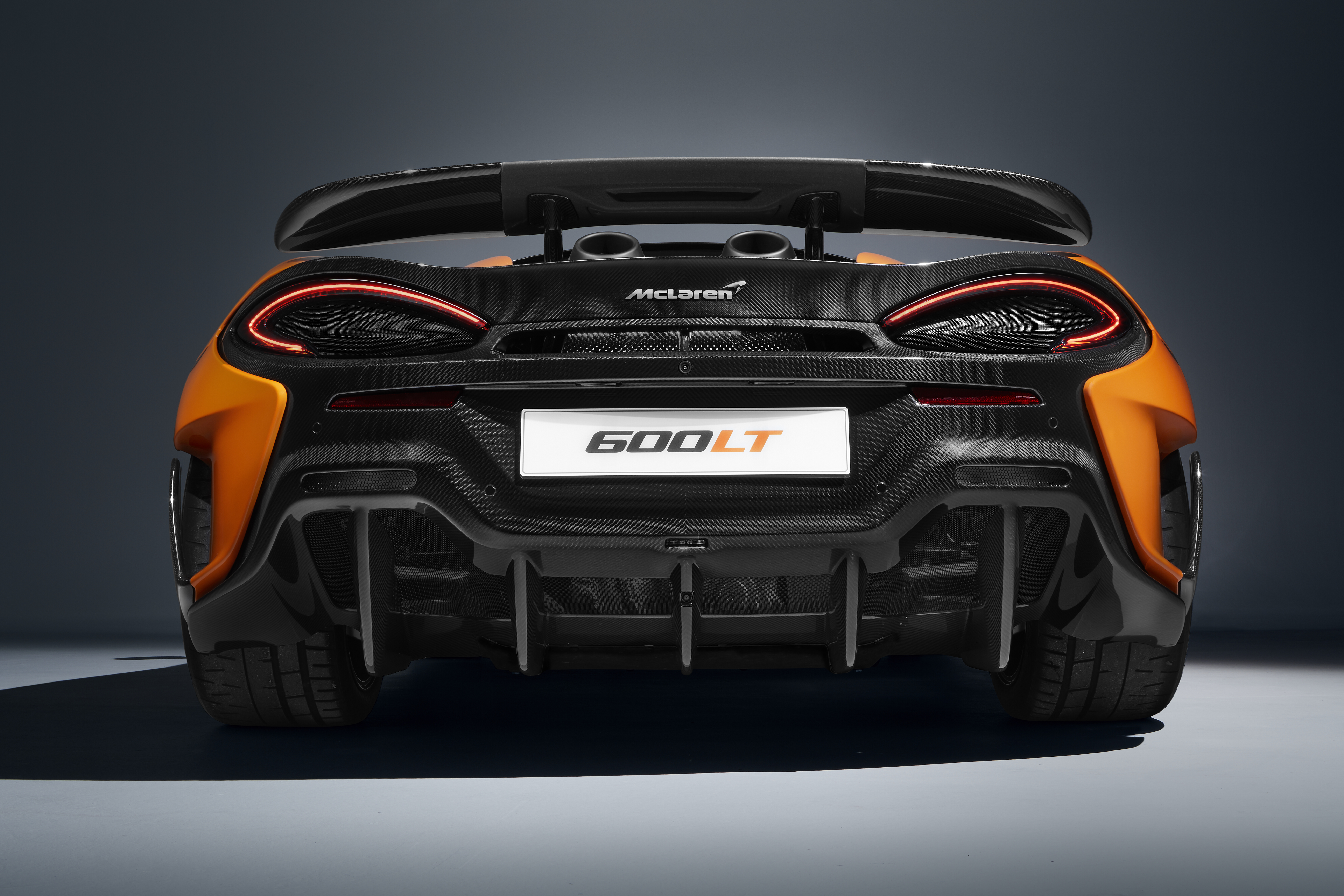 The quickest, most powerful and most track-focused – yet road legal – Sports Series McLaren made its debut at the 2018 Goodwood Festival of Speed. The arrival of the new 600LT, which is built to excel on roads and race circuits alike, marks both the beginning of the next chapter in the McLaren ‘Longtail’ (LT) story and the setting of a new benchmark for super-sportscar performance.

“The new McLaren 600LT is our most extreme road-legal Sports Series model and possesses the optimised aerodynamics, increased power, reduced weight, track-focused dynamics and enhanced driver engagement that are the hallmarks of any McLaren ‘’LT’. Only the fourth McLaren in more than two decades to be designated a ‘Longtail’, the 600LT redefines expectations of super-sportscar performance, delivering astonishing acceleration and outstanding track cornering speeds with a truly extraordinary dynamic connection between driver and car.”- Mike Flewitt, Chief Executive Officer, McLaren Automotive

The new McLaren 600LT epitomizes the McLaren philosophy of producing lightweight super-sportscars that deliver extreme performance and are exceptionally rewarding to drive. With the engine management system of the 3.8-liter twin-turbocharged V8 recalibrated and less back pressure from a top-exit exhaust system that is even shorter and more extreme than that of the McLaren Senna allowing the engine to breathe more freely, the 600LT can call on peak power of 592bhp at 7,500rpm and a maximum torque output of 457lb ft at 5,500-6,500 rpm. These outputs deliver astonishing levels of performance: 0-62mph takes just 2.9 seconds, matching the acceleration of the revered McLaren 675LT Super Series model (0-60mph in just 2.8 seconds). 0-124mph is achieved in a remarkable 8.2 seconds and the 600LT can continue gathering speed to a top speed of 204mph.

Inspired by the renowned McLaren 675LT models and their iconic ‘Longtail’ McLaren F1 GTR racing predecessor, the new addition to the LT family has all the physical hallmarks of a true McLaren ‘Longtail’, including an extended front splitter, lengthened rear diffuser, fixed rear wing and elongated silhouette – in this case by 2.9in compared to a McLaren 570S Coupé. The unique bodywork optimizes aerodynamic performance, working in conjunction with the flat carbon fiber floor of the 600LT to produce the 220.5lbs of downforce at 155mph that generates more grip and greater high-speed stability and is a significant contributor to the car’s excellence on a track.

Extensive use of carbon fiber – including for the monocoque chassis that is some 25 percent stiffer than a comparable aluminum chassis and for the new aerodynamic features– together with lightweight materials throughout the track-focused cockpit, helps the McLaren 600LT to achieve a lightest dry weight of 2,749lbs and an equivalent power-to-weight ratio of 474bhp/ton. With the optional Super-Lightweight Carbon Fibre Racing Seats developed for the McLaren Senna fitted, the 600LT weighs 220.5lbs less than a 570S Coupé – a remarkable reduction that delivers tangible benefits in every aspect of the car’s performance.

The remit of any McLaren ‘Longtail’ model is to engage and excite to the absolute maximum, encouraging – and enabling – drivers to fully exploit the dynamic performance inherent in the car. The ethos underpinning every aspect of the development of the McLaren 600LT was therefore a determination to deliver the purest possible connection between car and driver.  To this end, the McLaren 600LT has lighter and stiffer suspension components from the McLaren 720S, the adoption of the forged aluminium double wishbones and uprights not only improving dynamic capabilities, but also reducing weight by 22.5lbs. Ride height is reduced by 8mm over other Sports Series models and front track is increased by 10mm, to deliver a more precise driving experience. The independent, continuously variable adaptive dampers and front and rear anti-roll bars featuring on all McLaren Sports Series models have been retained but are significantly re-engineered to work with the new suspension geometry and create the track-focused performance demanded of the new 600LT.

The adoption of the braking system from the McLaren Super Series, which features lightweight aluminium calipers and stiffer carbon ceramic discs, reduces weight by 8.8lbs, working in conjunction with an all-new brake booster developed using learnings from the McLaren Senna, the result is incredibly responsive and progressive pedal feel during braking and a 124mph to standstill distance of 383.9ft – just 3.3ft more than a McLaren P1™.

Two new designs of ultra-lightweight aluminium alloy wheels – 10-spoke as standard and a 5-spoke alternative as a $4,950 option – are the lightest wheels ever fitted to a Sports Series, the reduction in unsprung weight bringing a noticeable benefit to the dynamic qualities of the car.

Bespoke P Zero™ Trofeo R tires – developed with McLaren Technical Partner, Pirelli – feature for the first time on a Sports Series model and this unique track-focused tire is a crucial element in the enhanced dynamic abilities of the McLaren 600LT. Tuned to deliver the immediacy and steering feel for which McLaren is renowned, as well as excellent rear axle stability, the ultra-high-performance tire features a softer sidewall structure than is usual to improve compliance and so grip levels by ensuring the contact patch with the ground is maintained, even on less-than-perfect surfaces. By contrast, the belt construction of the Trofeo R tire is stiffer than on any previous Sports Series, to enhance lateral acceleration and improve cornering ability.

The cockpit of the McLaren 600LT exemplifies both weight reduction and a driver-focused environment. Lightweight Alcantara ® trim material is used extensively throughout and the absence of carpet in the driver and passenger footwells and beneath the seats saves 12.6lbs, while also exposing the carbon fiber beauty of the MonoCell II chassis construction. The glovebox has been removed and the door pockets replaced with lightweight nets, while air-conditioning, satellite navigation, and an audio system are all available as no-cost options, not being fitted as standard. Carbon fiber Racing Seats, first seen on the McLaren P1™ and subsequently used in the McLaren 675LT, are standard-fit and save a remarkable 46.3lbs.

Production of the 600LT Coupé will begin in October 2018 and last for around 12 months, with build slots scheduled around existing Sports and Super Series models, as well as the sold-out Senna, Senna GTR and BP23.  Availability will be strictly limited, the specialist carbon fiber body panels that require specialist tooling just one of the reasons that the new ‘Longtail’ will be rarer than its Sports Series brethren.

Available to order now from McLaren Dallas and McLaren Houston – subject to availability – the 600LT Coupé is priced from $240,000 (US), which includes** a Pure McLaren Road Owner Track Day at a race circuit, with expert driving tuition.

To discover more about the new McLaren 600LT, visit: http://cars.mclaren.com/sports-series/600lt. A film showing the car in action can be viewed here: https://youtu.be/KCzFQy0px7M.