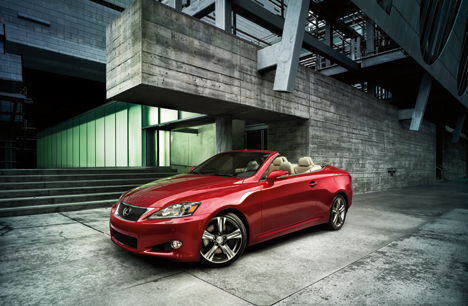 (This guest blog was written by one of our amazing clients at Park Place Lexus Plano, Robert Lee, who did an incredible job of providing a special Christmas surprise for his wife. It’s such a great story, that we thought you would like to read it too!)

It was one week before Christmas and I got a text message.  The text message (to paraphrase) asked if I would be interested in trading in my wife’s 2010 Lexus IS250-C with a 2013 model.  It was from a sales associate I’ve worked with before at Park Place Lexus of Plano.  While this may seem like a sales pitch, it was not.  The associate knew my wife and I were huge car enthusiasts.  No, we’re not made of infinite means and my wife’s car is in perfect working condition (it had less than 8,500 miles on it).  However, with the revised IS coming out next year and the “December to Remember” event at Lexus – he thought we could have an opportunity to get a great deal on a new car.  So a plan was hatched (BTW, this article is not about patting me on the back – more about the dedication Lexus puts into customer relations).

I am a firm believer that life is about experiences.  In front of me was a perfect opportunity to create an everlasting memory for my wife.  The plan went like this:  I would swap out her 2010 IS250-C with a 2013 IS350-C.  I knew that besides some very minor visual cues (day time running LEDs, GPS antenna shape change, telematics system) the cars would look identical.  Stephen Wedderburn (the sales associate) searched high and low and was able to locate for me an updated version of my wife’s car.  The cars were the same in every way – color outside, inside, options, wheels.

A little white lie later, I was able to take my wife’s old car and drove it to the dealership for the swap.  Having both cars parked side by side, I replicated the cabins.  I moved all her personal belongings from old to new.  I adjusted the seats, mirrors, radio stations.  Then I had to race home so I can program the home-link garage door opener before she returned home.

So the trap was set.  She returned home and didn’t notice a single thing.  Like a predator waiting for its kill, I patiently watched as she went about her day knowing that she will use her car again in the very near future.  And then it happened, she needed to leave the house.  She got in her car and was about to start it.  After a slight pause, she hopped out of the car and ran to the rear and noticed that it was an IS350-C (i.e. NOT her car).  Needless to say, the cat was out of the bag at that time.  Struck with shock and glee, she ran to me and thanked me for the amazing surprise.

While I had hoped that she would have driven away and then noticed it, it was great to be there to see her reaction.  I later asked what gave it away.  Her response was the “new car” smell.  For a flash of a second, she thought I had taken her car and gotten it detailed.  So she glanced at the touchscreen and noticed it squeaky clean.  Then lower she went on the center console and that’s when she noticed.  Her knowledge of Lexus cars is staggering.  She noticed that the air recirculation button now has an “Auto” setting (that was an IS350-C exclusive even back in 2010).  Go figure – the car was too perfect – that’s what gave it away.

In short, it was a surprise I could not have pulled off without the aid of Stephen and the amazing staff at Park Place Lexus of Plano.  His dedication to his job is evident in everything he does.  Considering that it was the dealership’s busiest time of the year (i.e. time when he can be making more sales if he was on the showroom floor), he took the time and effort in making this happen for me.  Don’t let his youth and dashing smile mislead you, he is a professional thru and thru.  We’ve purchased our last four cars from Park Place Lexus of Plano.  We have no reason to go anywhere else.  If what you want is a great car and to be treated with respect – please go visit Stephen at Park Place Lexus.  You will not be disappointed.  Kudos to the entire staff at the dealership.  They are all second to none.